If it's good enough for the engine room 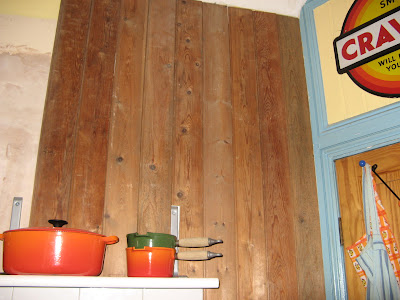 ... Then it's good enough for my kitchen. The time before last that Jim was up on Warrior, I took advantage of his absence and took down some shelves* in the kitchen. I say shelves; what they actually were were primary school lockers, minus the doors. A set of foot square boxes seven boxes wide and three high. They were super, and I was very pleased when we salvaged them from the school, and for years they held all manner of treasures. Coffee pots, mostly. But I was starting to find it all a bit overbearing and as I was in the process of downsizing the antique collection, not really needed any more.

What I had forgotten was that when we moved into this house, there had been a door knocked through this wall, and although Jim filled it in and made it good it's still bare plaster and not quite flat. But fortunately we still have lots of the wood left that we did Warriors engine room with; pine T&G from a 1920s house (well, they wanted it replaced with nice smooth plasterboard). Perfect, especially as one wall in the kitchen is already - original from 1901 - done similarly. When it's finished the whole lot is going to be painted in some trendy shade of white.

Gosh, keeping up a post a day isn't going to be easy.

*When I say I did it, obviously what I mean is I told Aaron and Sebastian to do it. Children are so useful once they get big and can wipe their own noses.
Posted by S at 6:40 PM

I am very jealous of your saucepans!

All jumble finds, except for the big casserole which I bought with my birthday money one year in the seconds shop in Portsmouth.

Come on, Sarah, half-an-hour to go... will you post before pumpkin time?

No - I failed. Long day at work coupled with nothing to write about...working on a why-oh-why for later though.