This one's for Nev

Blimey. I turn my back for five minutes, and suddenly it's CanalWorld (electrical chapter) here. Talk about lowering the tone. Let's have little interlude, play some soothing music and... that's better.

So, to our first request. Nev would like to hear the latest on poor little Helyn. Well, I'm afraid there isn't much to report; she's still sitting on the drive working on her green patina while we are distracted by other matters.

The most dispiriting thing which has hindered progress has been the steering cable. We had to replace it, because it broke. The old one had an eleven inch throw; these are apparently no longer made. The new one has a nine inch throw. Now you (I) would have thought, no matter, it won't have quite such a tight turning circle, but it'll still work; after all, that's only one inch less movement in each direction. But it seems that the difficulty is getting it lined up centrally to start with, rather than having it turn all the way one way and not at all the other. I have held the bloody thing in my hands and moved the engine and it has been fine, and I said, look, this is fine, all we need to do is make sure that THIS bit is held HERE and it will work. But apparently there are not the means to hold THAT bit THERE rather than where it wants to go. It is the sort of situation I find very frustrating because there's no reason for it not to work; everybody else seems to be able to make theirs work, and I can see with my own eyes and feel with my own hands how it should work.

So we tend to think, hmm, lets go off and do something else and perhaps the answer will magically come to us in our sleep, or the mice will do it. The interior is now pretty much finished. All the flaky paint has been removed and replaced with nice bright proper white paint. The exterior will need another scrub, and maybe a new coat of varnish on the handrails, but all the other jobs are tiny little things. I still want to take the trip up the Sussex Ouse once it's finished and before we sell her, if at all possible, but we really do need to get on. That's one big bit of clutter!

Anyway, while I was in Birmingham I saw one of Helyn's long lost relatives: 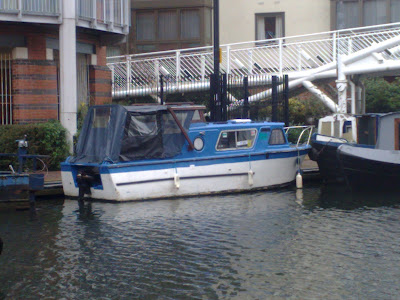