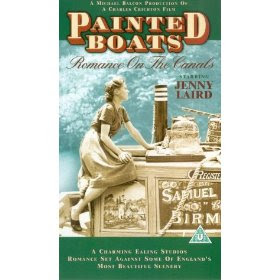 I went to see a film last night; not something I often do. But this of course was a film featuring - if not actually about - boats. Apparently Painted Boats, directed for Ealing Studios by Charles Crichton in 1945 was intended as the first in a series of what we would now call docu-dramas about workers in wartime Britain. In the event, no others followed.

As a film drama, it is, to be perfectly honest, not exactly gripping. It centres on two boating families: the traditionalist, horse-boating Smiths, whose daughter Mary has somehow acquired a cut glass accent and is wont, at moments of heightened emotion (which are frequent) to clasp a kitten to her breast. Interestingly, although the film is set over a period of months, the kitten never gets any bigger. The cause of the heightened emotion is Ted Stoner, whose family have a motor boat and butty, but who has had a bit of education and can't wait to get off the cut. My favourite character was the obligatory cheeky kid brother, Alfie. So we follow the trials and tribulations of the families through various life events - the death of Mr Smith, the replacement of horse by engine and the eventual call-up and escape of Ted, after which Mary and her mother continue pluckily on to Limehouse, accompanied by Alf who, although it is never spelt out, I like to think has also escaped from the fate of being sent to live with an aunt and going to school.

But the plot and the accents and the size of the kitten don't matter at all, of course, because it's got boats in. And there is nothing like some old footage of heavily loaded boats, particularly with a Bolinder soundtrack, to get me clutching the metaphorical kitten oh so tightly. I'm not entirely sure who was playing the boats, only that they were fictitious characters - although quite a few others did make cameo appearances as themselves. I'm sure this is a matter of record somewhere, but I can't remember where.

The event was courtesy of the IWA, held at the Pirate Club in Camden, and was the first of their 'socials' I've attended. Everyone was certainly very welcoming, and it is, I hope, no disrespect to note that a good number of them could have been founder members - and who knows, perhaps were. It was also a great pleasure to meet Tim Lewis, one of the prime movers behind Fulbourne, one of my favourite-to-look-at boats.
Posted by S at 11:39 AM