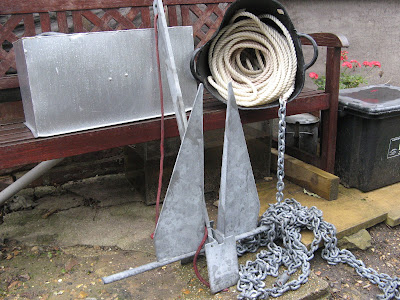 Oh boy, look what we've got. Jim spotted it among a pile of old stuff outside one of the chandleries in Newhaven, and snapped it up for a bargain price. I'm not sure what this means for our future travels, and whether it's reassuring (I was never sure our other anchor would be up to anything too strenuous) or worrying (about where such reassurance might lead us to venture).

Nor am I entirely certain where it's going to live. There was a brand new narrowboat at Floods Ferry when we were there - if I remember rightly it was called Wandering Snail, and featured a painting of one and an elaborate pun about being the 'less cargo' carrying company. Anyway, it had been built with a special anchor shaped recessed panel in the cabinside. Terrible, isn't it, how you never think of these things until it's too late.
Posted by S at 8:01 PM

That looks identical to the kit we inherited with Melaleuca. It was originally in the gas locker, but getting it out involved removing both cylinders and nearly involved removing several fingers, so now it's stowed under the bed in the back cabin. It certainly looks purposeful, but we've never had occasion to fling it over the side and see what happens.

The people I know in Cambridge who have anchors generally store them in the river, as they take up too much room otherwise...

Wandering Snail is now in Gent they sent me an email/photo last week. They have been iced in with skaters going up and down past their boat.
I am trying to gt them to run a Blog but I don't know what their internet connection is like.
Brian
ditchcrawler@gmail.com

It was a fantastic boat inside - I believe it has a harpsichord. Bones would be jealous!

Wandering Snail now has a blog
wanderingsnail.blogspot.com
They have only just started it with a nice picture of them in the ice.

I've just been and had a look and left a comment. Thanks!

Hi there Sarah!
We're new to all this and are quite amazed at the quality and speed of blog communication.
And yes it is us with the harpsichord. Thanks for your comments re the boat. Yours looks rather special too. Anne 'n Olly