I know I'm always banging on about things changing, and usually for the worse... And even if the change is for the better, I still have a bit of a problem with it. It's a bit hard to explain, but I suspect it's all of a piece with my inability to remember which direction I was walking in when I emerge from a shop, or to have any conception of how a linear route relates to a map - I can manage with one or the other, but it was a revelation to me that some people can effortlessly combine the two. The problem is that once something is changed, I simply cannot remember how it used to be. Just very recently it's dawned on me that some people have very visual memories, and others - e.g, me - don't. Most of my memories tend to be stored as human Word files, rather than jpegs. And of course the thing with the workings of the human mind is that it takes a long time before you realise that not everyone is the same as you. 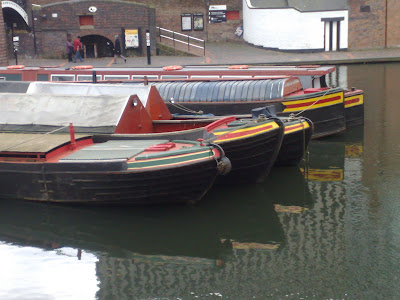 Anyway, when I got back from Birmingham last week I showed Jim my nice Gas Street Basin photos, and last night, he recognised the very same scene on his second reading of September 1974's Waterways World (25p). The scene clearly isn't exactly the same - the buildings are different and I think the photo must have been taken from a different vantage point (but I can't be entirely sure, which is symptomatic of my affliction) but the amazing thing is that the boats could be the same. Some of them probably are. 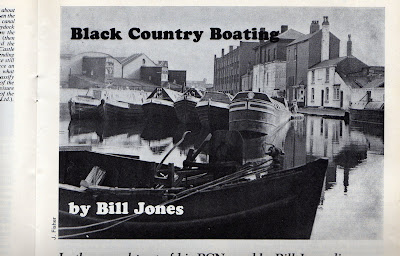 Sincere apologies to WW for nicking the picture, but I do hope they won't mind.
Posted by S at 7:43 PM

But you didn't mention the most glaring change between the the two pictures - the arrival of the bridge over the lock.

I guess this was added when BW finally removed the lock gates, so it must be fairly modern, but it blends in nicely. The abutments are pleasing brickwork in dark engineering brick, and the arch cast iron, painted black and white.

Without gates on its lock, Worcester Bar is a barrier no more: not even a part-time one.

That's because I wasn't sure if I was looking in the same direction...

You're not looking in the same direction, but you can see (some of) the lock on both photos. In the modern one, half of the new bridge is at the extreme-left top of the frame, and the abutment for the bridge is visible to the right of it. In the old photo the view has rotated 90 degrees anti-clockwise. You can see the end of the lock to the right of the boat with bows that look like a floating dustbin.

Furrows brow... so is the dustbin actually in the same place?

The dustbin is in more-or-less the same place: in the old picture it's on the end of the row, in the modern one there's another boat between it and the end of the row. It is pointing the same way with the back against the same length of bank.

That's actually another dustbin on the end in my picture, but sitting lower in the water. Anson on the end, and Collingwood on the inside. Both Admirals, but Collingwood cunningly disguised with bluetop covers. I wonder whether that's Collingwood in the 1974 photo - more than likely, I guess.

Must put some more of the archive articles up as PDFs...