Platform one and three quarters 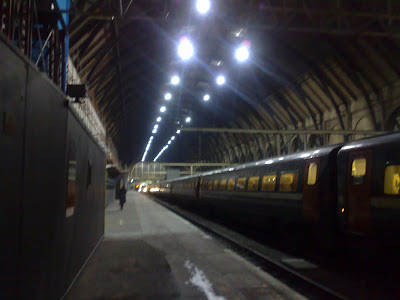 Whenever I visit Tarporley, or the Museum, or, for that matter, my friend Dean, I always make sure to make use of the footpath along Platform One at Kings Cross. It's actually a lot more pleasant, and I guess it must be quicker, than walking around the outside, but above all it is a Matter Of Principle. Because, I hear from a range of sources, although I couldn't find anything on the web, plans are afoot to extinguish said right of way as part of the development of Kings Cross and the surrounding areas. There were, I believe, people counting how many people used the route, as if that would have a bearing, although I suspect (and so does an Islington councillor I met at some event last year) that it's a forlorn hope. It is quite heavily used, despite the powers that be clearly discouraging it (by making the exit path very narrow and invisible for a start) but I hold out no hope that the great god regeneration will fail to see it off in the end. Which is a shame.

There is a certain glamour and romance about Kings Cross that you don't find at other stations. When the mist rolls into that great shed you can almost imagine that it's smoke and steam wafting about. St Pancras, lovely as it is, is too new and clean to convey this atmosphere, and Euston - well, the less said the better.

I have a soft spot of course for Kings Cross because of my weekly commute to Huddersfield over a period of eighteen months. London may be one of the most cosmopolitan cities in the world, and wherever you go - including the concourse at Kings Cross - you are surrounded by people speaking hundreds of different languages; dressed in myriad different styles, and of all hues of skin and hair. But the really exotic thing, the promise of romance and adventure, is in the big fat red faced GNER guard, who greets you in a broad Yorkshire accent. It's that that tells you that this is the gateway to new and strange places.
Posted by S at 7:59 PM