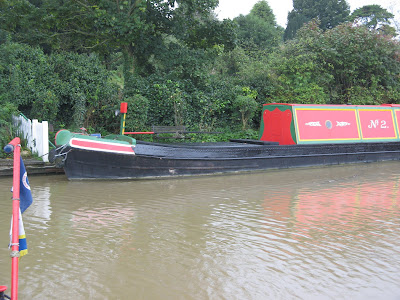 I must apologise. I have - so far - managed to post every day in February, but only at the cost of posting some extremely boring photos. The trouble is, there just isn't much happening in February. Things start happening soon; Jim is off in a couple of weeks to make the final preparations for the Easter Excursion, and then the Easter Excursion (or incursion, I suppose, if you happen to be reading this in Cambridge) will occur, closely followed by the June Jaunt and then the August Outing, which will no doubt provide reams of fascinating copy. March will also bring at least one new book review, and there is the possibility - I put it no higher than that - of me getting a ride on a Big Woolwich... so watch this space.

In the meantime, here is a picture of the front end of Canis Major, as featured in the Advent Calendar, which is (and here I duly reference AMModels) the back end of the GU butty Canis, but I don't know whether that constitutes the front end of Canis Major, and is therefore in the picture, or not. My admittedly untrained eye plumps for not, but I stand to be corrected. It is not, of course, in itself boring.
Posted by S at 8:49 PM