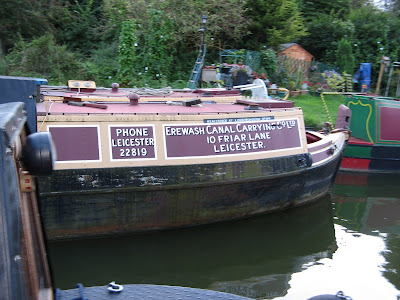 Pick any random number between one and four hundred. The fifth time I do it, and I pick a photo I've already used. So I picked another one. I can't see the names, but I guess it must be Cedar, with Cyprus inside. Cyprus is another of those rather charming misspellings; it should be Cypress, as in the tree, but got named after the country instead. Of these four Erewash boats (built by Yarwoods?) I also saw Ash when I was in Birmingham.
Posted by S at 4:05 PM

Sarah, If you're surprised that you picked a duplicate after five photos, then you're probably confused by a variant of the birthday paradox:

Looking at the Wikipedia article, if the series is exponential, and having a group of ten gives you a probability (of two of them being the same) of 11.7%, then having a group of five must give you a significantly lower probability, lowered slightly more by the fact that the number of possibilities here is 400 not 366.

I think that would be low enough to be surprising.

Using the handy calculator linked to at the bottom of the article tells me that the chances of my fifth random selection out of 400 being the same as one of the previous four was 2.47820303124999%

I did try to do a link but that was a bit ambitious for me, hence previous abortive post.

So the probablity of doing what you did is a whole order of magnitude larger than the very naive estimate of one-in-400. It's almost a certainty!

I wouldn't mind betting that your random selection method is a lot less than perfectly random, too: generally humans are not good at picking randomly.

I remember falling into the trap when I was first posed the Monty Hall problem. My only excuse being comfortable quantities of French food and wine.......

But I never thought it was one in four hundred! I wasn't even particularly surprised, more sort of resigned... isn't that typical.
Of course what I put in the third comment is wrong; that was the probability of any two of the five being the same; the chance of the fifth being the same as any of the other four is I think lower still (that being the difference in birthday terms between two people in the room having the same birthday, and another person having the same birthday as me or another specified individual. Or does that turn it into a variant of Monty Hall?)

More like a variant of CJD? all we need is Chris W to come along and all will be fine!!

(Possibly) interesting aside: many computer security problems arise due to random numbers which aren't as random as they should be. Lots of interactions between computers depend on the good-guys knowing a random number which the bad-guys can't guess. Computers are fast, so that bad-guys can try lots of guesses. If the random numbers aren't random enough, so that bad guys can bias their guesses in favour of the more probable numbers, they can get luck quite easily.

The big flap last summer over the security of the Domain Name System was all to do with a random number guessing attack that relied on Birthday Paradox.

I like all this sort of thing. I like the fleeting moments of understanding that are gone as quickly as they arrive.