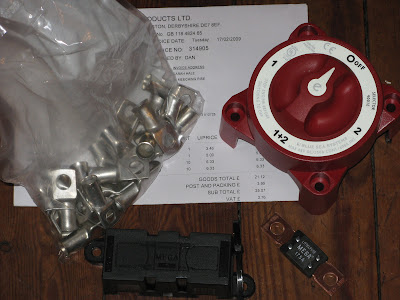 For weeks now Jim has been driving me mad (yes, even more than usual) by reading out bits from CWF and from emails from Moominpapa, and worse, far worse, trying to EXPLAIN to me about matters electrical, and this is something I neither want nor need to know. The fact that I have a total mental block against understanding it doesn't help either. But will he stop trying to tell me?

Yes, yes, I know it's important to know the basics. And I thought I did. I know how to wire a plug and I know what fuses are for and how domestic earths work, and I know not to stick my fingers in sockets and throw electric fires in the bath and all that sort of thing. But bloody hell, it's a whole different ball game on boats. In my naivety, I'd have thought that 12v DC would have to be simpler than 240v AC, but how wrong can you be?

But I suspect that no one else really knows either. Otherwise they wouldn't constantly be arguing about it, would they? It's a matter of as deep division as the Creed. It's what we philosophers call an essentially contested concept.* There are, I would go so far as to hazard, no objective truths (short of don't stick your fingers in the socket).

So these objects are for something. Just don't ask me what.

*Don't bother looking it up. This is not, strictly speaking, true.
Posted by S at 9:27 PM

You don't know what they're for ... and yet you get the bill!