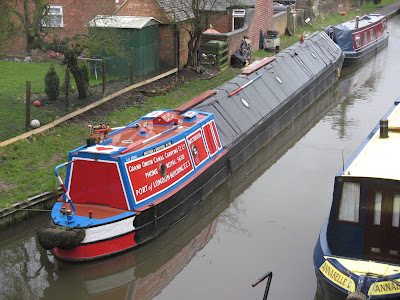 Well, we were going to be. We set off on a drizzly Saturday afternoon to Norbury Wharf with the half-formed intention of posing as potential purchasers of Battersea as I previously suggested we might, but to be honest once we got there we didn't really have the heart for it. It was raining, there was nobody about, and the boat was tied up right out of the way, and I didn't think we'd fool anyone for a moment. So we found a bridge from which we could have a good look at the cabin top, got slightly damp, and headed back to Warrior.

We did pop into the shop, where I swiped a copy of the details (feeble, and printing them on yellow paper does no boat any favours) and we bought a pair of brass fairleads. We did not buy a bag of 'duck food' - scraps of mouldy bread at 50p a bag, cunningly positioned at child-eye-level. Nor, fortunately, did we need to fill up with water, which would also have cost us ten bob. They're missing a trick; they could have charged people to look at Battersea. Perhaps they would, if we'd asked. I didn't try to use the loo, either (an aside, though: the loos at Victoria Station (the London one, just to show that I'm not making capital-centric assumptions) normally cost 20p (although if you're thin you can get through without paying. Not that I would of course...). A while ago the turnstiles were out of order so they had to leave the gates open so people could just walk in without paying. And they put up a sign saying 'Out of order. Sorry for any inconvenience'. )

One other thing about our little jaunt: what a hairy road, at least the one we took, from Stretton to Norbury. Not just the classic country lane/track down which whizz 4x4s in the middle of the road, and tractors, but tunnels - as far as I can tell going under the Shelmore Embankment - on blind bends; two of them. That was the main excitement of the day, although we did go to B&Q in Cannock too, and spent some money.
Posted by S at 7:33 PM