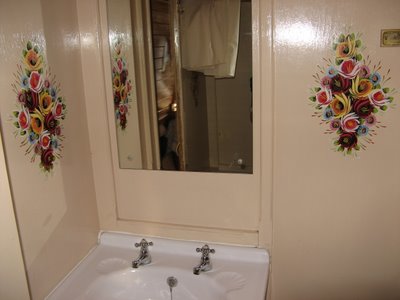 It occurs to me that I've not yet written anything about Warrior's bathroom, probably because we haven't done any work on it. Except for giving it a bloody good clean, that is, which I did whilst constantly muttering 'filthy beasts of men' quite loudly. The only other thing we've done is put some heavy duty non slip vinyl (salvaged from a skip in Huddersfield) on the floor, and we haven't finished that yet.

It's a very nice bathroom, which is why we haven't felt the need to change it. As you go through the door from the corridor, the 4' bath is on the right and the basin, with cupboard under, and toilet on the left, with enough room to move in the middle. The toilet is a classic 'dump-through' one which I love for its inability to get blocked, after regularly having to attack Andante's converted sea toilet with a large sink plunger. On balance I think I prefer a pump out toilet, largely because you don't have to get quite so intimate with its contents when emptying it. So far I've been fortunate enough to be based on waterways well provisioned with BW self pump outs (except on Warrior's home mooring, where a man comes round with a tank on the back of his tractor, and swills it out with a bucket of canal water). However, you will be pleased to hear the we also have ample space for a porta-potti too if required. Did ever a more stupid brand name become a generic term? Hoover, Biro ... Porta-Potti. In fact, ours is an Elsan Visa-Potti, superior in my view to the Thetford original.

The bath has a shower over it, but I wouldn't try to use it as such because I don't think the surround is sufficiently waterproof. Secondly, it uses too much water, and Warrior doesn't have an enormous tank. Instructions for using Warrior's shower (are you reading this Baz?): 1. Fill small bowl with warm water. 2. (In cold weather) Run a little hot water over the bit of the bath you're going to sit on. 3. Sit in bath. 4. Scrub face and body using water in bowl. 5. Tip bowl of water over head. 6. Shampoo hair. 7. Now you can turn the shower on and rinse everything but do not on pain of death get any water up the walls.

The reason it is not very waterproof is that John Shotbolt has an aversion to tiles. We know this because he told us. Actually, it seems very sensible not to have tiles on a boat, especially on a thin partition wall, as they aren't very tolerant of movement or sudden shocks. Instead, Warrior's bathroom is painted throughout, in a sort of elastoplast pink, with loads of swags of roses, on every spare bit of wall, and it looks wonderful so I wouldn't want to change it. The mirror is going to have to come down though, as the diesel day tank is going to be bolted through that wall. We will probably try to find or make a shallow mirror-fronted cabinet to accomodate the bolt heads. It's hard to get a decent photo in such a small space, but this was the best I could manage, standing in the bath.
Posted by S at 7:44 PM

what about using some vinyl flooring on the walls by the bath itself to make it waterproof? You can use the thin stuff and it comes in plain colours.

But the painting! The painting! It is splash proof, around the edges, so perfectly OK as a bath, but to take any wall covering high enough to use it as a stand-up shower would mean going over a big swag of painted roses - and I don't want to do that. Just as easy so sit down and save water! Good idea though in general - I would certainly give it a try.