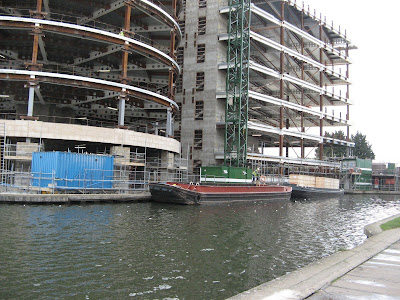 Aagh! They made me change over to New Blogger!

British Waterways bankside staff always wear lifejackets. They all wore lifejackets when they were helping us over the Pennines, even though the reason they were helping us was because the water was about eighteen inches deep. I know you can drown in six inches of water, but if you're that determined then a lifejacket isn't going to help. BW sanitary station cleaners wear lifejackets. The man from Camden Council who sweeps the Regents Canal towpath wears a lifejacket. And there is an understandable, if not a good, reason for this. All these people are employees, and their employers (and their employers' insurance companies) are, in this litigious age, taking a better-safe-than-sorry, covering-their-backs, approach to their responsibility for their employees' safety.

It's the same on building sites. People working on scaffolds have to wear harnesses and hard hats - even though many say this actually makes the job more dangerous, because of the way it limits visibility and movement - so that the responsibility for any injury or accident can be laid at the door of the individual worker, not the employer. Jim once asked why he had to wear a hard hat when working on a scaffold right at the top of a building, and was told that ice falling from a passing aeroplane might land on him.

So it was interesting to see that the people building Kings Place, the new arts 'n' office complex on the Regents Canal behind Kings Cross, who are actually working off boats (a positive aside, reported in Canalboat (March 2007, p. 19; oh dear, you can tell I'm an academic) is that building materials are being brought to the site, albeit a very short distance, by water), while fully kitted out in hard hats and hi-viz vests, were lacking any kind of bouyancy aid. Naturally, when I went to take a picture there were scarcely any men to be seen (I suppose it was lunchtime) but the time before there were loads, working off the lighters (I take Canalboat's word that that's what they are; I would have called them barges and thus no doubt incurred the wrath of many lightermen) and working on the building directly above the water. Now, clearly, if they were to fall from a great height into the Regents Canal then a lifejacket would be the least of their worries (but how deep is it there?), but I hope they appreciate how lucky they are that their employers haven't though of it yet.
Posted by S at 7:44 PM

they made me change to the new blogger too! Have you worked out the advantages yet? I haven't.

No. And it signed me in using an old Google account that my computer remembered but I don't. If this comment goes up, you'll know I finally worked it out, but I've had two unsuccessful attempts already ...

I haven't seen the advantages either, except that we're now part of the google empire.

Still, no doubt somebody is happy about it. :)

I don't know, I go to all this trouble thinking of interesting baoty things to write about, and what gets most response? Bloody Google/Blogger. I am actually, normally, a big Google fan for the simple if shallow reason that by and large they find easier ways for me to do things than any other system/interface. But maybe that is starting not to hold true any more.