Electrics - no progress to report 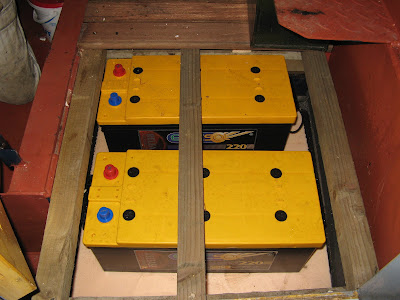 We have met some very good people in the course of doing Warrior. Most of them, at some time or another, have caused us some degree of frustration, and maybe in some cases that has been mutual. Jim and I are perhaps not the easiest of people to get on with (well, I think I'm OK); I know this because we frequently tell each other so. But sometimes you just know things are not going to work out.

Take this electrician - we agreed a lot of sophisticated and expensive work with him, and he was due to start work on Warrior, with Jim, a month ago. This means Jim staying up there for a week, so I bought train tickets so I could come and go for work. The day before Jim was due to go up and meet him, he cancelled. After much weeping and wailing and gnashing of teeth, we decided to give him another chance - boat electricians seem to be very rare, and I suppose he knew it. So, Jim went up last Monday, expecting to meet the electrician on Tuesday; Wednesday lunchtime he rang to say he was running a bit late ... which I'm afraid was the last straw. We have now identified another one, but it was too late to do anything this week. Instead, Jim has been working on oiling the floor and all the fitted furniture, and we did a few fiddly little jobs over the weekend, but it wasn't a very productive visit really.

Still, Ian did drop off the new leisure batteries, and they are sitting in their place under the engine room floor waiting to start work. They were slightly wider than expected, so the start battery has been ousted from here and is back in its custom made box behind the engine.
Posted by S at 5:49 PM

I have lost track of where you are location wise?

(this is the fourthtime I have tried to sign in - I still haven't got the hang of the new blogger!)

Industry Narrowboats, on the Shropshire Union at Stretton Aqueduct, where the canal crosses the A5. Been there since last Easter. Home mooring further up the Shroppie at Hargrave, towards Chester, but won't be going back there for a while if this year's travel plans come off. How about you?
And this is my second attempt to comment on my own bloody blog thanks to New Blogger. Still, it dos at least now remember how I like my photos.