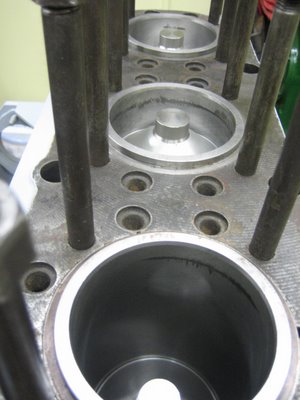 Engine again! Well, since you asked, it's four litres, 1330 cc per cylinder, or 80 cubic inches. Half as big again as the ones that pulled a boat and a butty and forty-odd tons of cargo. Excessive? Perhaps. But the way I look at it is, if we were building a tug in, say, 1940, and this engine had been offered to us, then we would have taken it, wouldn't we? Quite a few people have 3-cylinder RNs, which are the same size, and some Gardners (pah!) must be bigger...

I've finally uploaded the latest photos from RN here. Our engine is currently the centre of attention (long may that last) and they are now all cooing over it. A new problem has revealed itself this morning - a leaking water manifold. The water pressure-testing also revealed a leaky drain tap, which will be replaced with a shiny brass RN one (I always liked those anyway). The manifold is more problematic and the finest minds in Daventry are pondering it.

Perusing some other narrowboat blogs I came across Hadar, currently being built and fitted out by Roger Fuller. They've got as far as the back cabin now and it all looks very nice. But I'm intrigued by their engine; it's a National, but not a DM series. I have asked about it via their comments, but I can't even find the original comment now, let alone a response. I'd love to know what it is, how old it is and where it came from (via the Redshaws).

Jolly chilly up country, I hear. Not much left on Warrior to freeze, but I am experiencing slight unease about the back boiler, especially now we've got the stove working so well. We'll just keep our fingers crossed until we can get up there and stuff some cushions down the back of it or something ... (I don't think we could have drained it because half the hot water system is missing along with the engine, and if we did, would we dare light the fire? Not my strongest suit, plumbing.)
Posted by S at 8:24 PM

This is the third attempt to comment after the 'move' to Google, who I suspect will be making us drink Kool-Aid next............

Anyway, engine looks great and it'll be brilliant once its going. Do you need to run in an engine like this?

I have held out against moving to Google - I don't like it when things change when I've got used to them! I assume it will have to be run in but not really sure what that entails in boat terms ... not taking it straight onto the Trent maybe...I shall find out.