Aagh! There's an engine in my engine room! 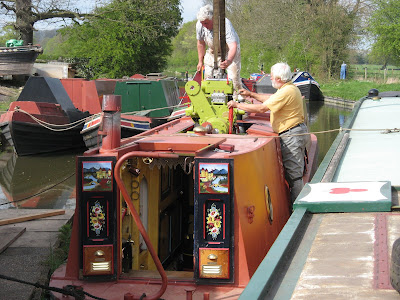 The engine was meant to go in tomorrow. So today we were doing a final tidy up of the engine room; Clive was finishing off the electrics, to all be ready for the big day. Then just as we finished lunch, up turns (?) Ian, and announces that it's going in today, as he's heard a forecast of rain for tomorrow. So instead of mooching around doing little odds and sods, it was suddenly action stations.

The lifting in of the engine went very smoothly (special thanks to Keith in the crane), and despite a couple of hard-to-reach nuts it was soon bolted safely (we hope) down. All that anticipation, and the actual event over in less than an hour. I then had the enviable task of doing up the fifty nuts that hold the roof panel on, all sticky with sealant, as Jim hammered the bolts through from above. We used round domed-headed bolts and they really do look good. Quite rivet-like. Before replacing the roof panel, Jim had a hole cut in it. We're not going to have a pigeon box, but a square vent copied from a Fish Class josher.

So that's the main event over, and a strange sense of anti-climax has settled, at least over me. Lots to do still, of course; the day tank is still to be fitted; Ian is sorting us out an original 30s CAV fuel filter, which will look a lot nicer than the white lump currently stuck on the front of the engine, and then there's all the engine plumbing and electrics to do. But there we are, the big old beast back in its bed. Welcome home, engine!
Posted by S at 7:53 PM