Another one of those 'little' jobs 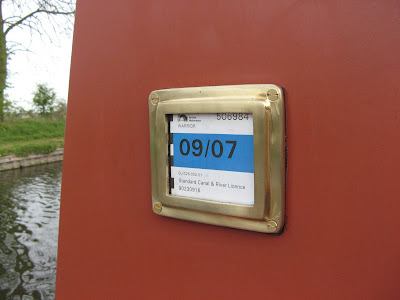 Putting up one - just one! - of the licence holders. These things look good (that's why we sought them out) and when you've only got portholes you don't really want two of them filled up with licences. But in practice they're not very well designed. This one consists of a cast brass frame, a piece of glass that looks as if it was cut with someone's teeth, and two bits of rubber: one small, to fit in the rebate behind the licence, and a larger one that goes behind the whole thing. The other one we've got only has the large piece. They cost about twenty two quid each, and you have to drill/cut your own holes in the rubber. As you have to take the whole thing off to change the licence every year, Jim bought a set of taps to make threads for some nice brass machine screws. These, naturally, entailed drilling bigger holes in the brass frame. Naturally, also, one of the taps broke in the hole. Apparently this is why they're sold in pairs. As there was no seal between the glass and the frame, we put some clear silicone in, and also between the frame and the backing rubber to be on the safe side. So it was another one of those apparently simple jobs that turn out to be a lot harder than you'd think, but I guess it was worth it. Just the other one to do now.
Posted by S at 6:27 PM