Having fun (in the proper fashion) 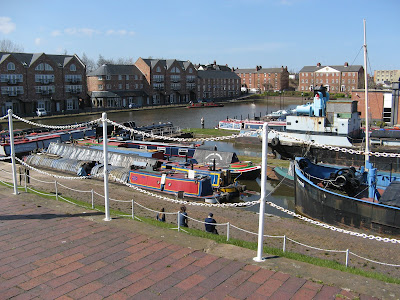 We went up to Ellesmere Port for the day today, for the working boats gathering, and generally had a rather nice time. We caught up with lots of people we hadn't seen for a while (a while being anything between a year and since last Tuesday); I went and explained myself to the owners of Seaford; we looked (in great detail) at two or three different National engines, and heard tell of someone else who has a three cylinder National - we can form an owners' club. We got more new ideas of things to do to Warrior (I think we must be into plans for about phase four now). Lunch was not very successful - we will take sandwiches next time. It was so much nicer when they had their little cafe upstairs where they made you toasted sandwiches. The beer was fine though but they only had Speckled Hen - brewed by Greene King! Afraid I still had some though. We bought a variety of interesting bits of brass (ye gods. More polishing) from someone we subsequently realised was Malcolm Braine: some step edging, various small bits and bobs and four handrails that have already been allocated (by me) to different uses. I took lots of arty farty photos but you can't see them yet because they're on film.

Ah yes, many years ago when the boys were about seven and three, we took them to a local open air museum. This would probably have been our first family outing with Jim and he wasn't really all that used to children, and he was bewailing their lack of interest in the various educational aspects of the visit. I said that it didn't really matter, as they were clearly enjoying themselves. 'I know', he said, despairingly, 'but they're not enjoying themselves in the proper fashion.' I am afraid that we have never let him forget this particularly felicitous turn of phrase, and there, I have now made it public.

I am pleased to report that by and large we did enjoy ourselves in the proper fashion today.
Posted by S at 7:27 PM