Now, about those injectors ... 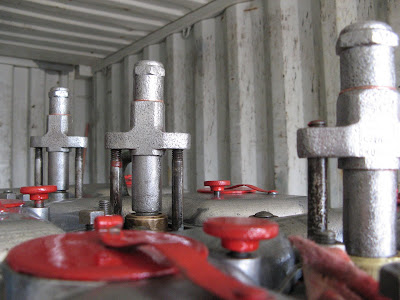 We got up at 4.30 this morning and left at six, to beat the bank holiday traffic - which we did with ease, arriving in a record time of three and a quarter hours. This time we brought Baz with us, and he has spent the day polishing all the bits of brass and copper I missed (including all the mysterious lengths of pipe out of the engine box), and helping Clive with the electrics. They're nearly finished now, and we have lights and sump pump now as well as water, just waiting for the fridge, which needs a new cable run added.

Now, about the injectors. When the engine arrived, most of it was in primer. Everything that had been primed back at the works, I painted. The injectors weren't primed, so I didn't paint them. Then a certain person who shall remain nameless came along and said, 'Have you not painted the injectors red Sarah?' Oh no, said I, for they were not primed. 'Oh', said PWSRN, 'But they will go rusty if you don't.' Oh dear, I said to Jim, PWSRN says that we have to paint the injectors. So he did, primed them and painted them red. Then along came a second person who shall remain nameless (even though he was right) and said to Jim, dubiously, 'I see Sarah's painted the injectors. Red.' This was reported back to me and I went and had another look, and it did look wrong. Too much red. Disaster. (Scroll down a few days to see.) Oh dear, I said to PWSRN2, we shouldn't have painted them red, should we. They wouldn't have gone rusty if we'd just put some oil on them. 'No', said PWSRN2, 'That probably would have been all right.' But we'll never get the paint off now, I thought. And sadly, I went home. Then I thought that maybe we should paint them black; this would at least be better than red. PWSRN2 (aesthetic guru) agreed. But when we arrived today and looked at the injectors prepatory to rubbing them down, we found that, actually, the paint came off quite easily, so Jim sat and whipped it off with the Perago. Obviously it took quite a while to get it out of all the nooks and crannies, but now they look better than ever. They've had a good rub with oil, and that's how they're going to stay. Whatever PWSRN1 says.