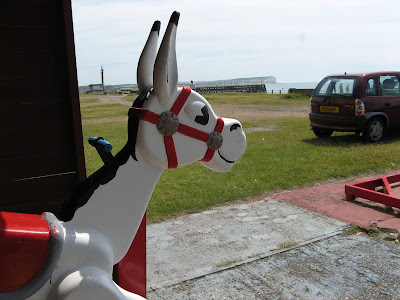 I live less than a half hour walk away from one of the very few, and probably the nicest, sandy beaches on the south coast, and how often do I visit it? I don't think I'd actually set foot on it for the last two years until last Sunday, when my sister was visiting. To be fair (to me) the beach was closed all of last summer, because of a chunk of concrete having fallen from the sea wall, and the private owners neither wanting to be sued if the next lump fell on someone's head, nor wanting to spend money putting it right. I don't know how they arrived at a solution, but it re-opened earlier this year, although sadly the breakwater remains well and truly closed.

It's a lovely beach because it's enclosed by the breakwater on one side and the harbour arm on the other; it slopes very gradually so the water is nice and shallow (for swimming, the pebble beach on the other side of the breakwater is better), and the tide comes right up the sea wall, so it's all clean and sparkly and new twice a day.

What's more, it has a car park right at the top of the steps (£2 a day), and a cafe (outside seating only) and an amusement arcade nestled at the bottom of the chalk cliffs. The amusement arcade is wonderful in a way that's hard to describe. In fact, objectively, it's awful - curling yellowing postcards, a Mr Blobby ride that would surely terrify any but the most robust child (presumably there are auctions of obsolete amusement equipment where smaller outfits purchase things like this?), giant faded photos of burgers and hot dogs; it's like something out of Scooby Doo ... but I'm not poking fun at it, or saying that it's good in an "ironic" 'so bad it's good' sort of way. It is genuinely wonderful that it's there at all, at this little beach in this little town, and it provides cups of tea and ice creams, and buckets and spades, and, yes, amusement, to a surprising number of visitors. It will be a very sad day when the West Beach amusement arcade closes for the last time.

So there we are, my sister (38) and I (even older), on the beach. No children even as an excuse. Nothing to stop us getting stuck in straight away with our newly purchased buckets and spades. While she went for a traditional fortified castle embellished with sand stalagmites, I crafted the sand narrowboat that I posted about a couple of days ago. And then the sea came in and washed them both away. Fortunately, (or possibly, you may think, not) I photographed my magnum opus at every stage of its development from design to destruction, and you can see it as a work in progress here.

And various other aspects of the West Quay, the beach, and the delightful amusements to be had, here.
Posted by S at 3:10 PM