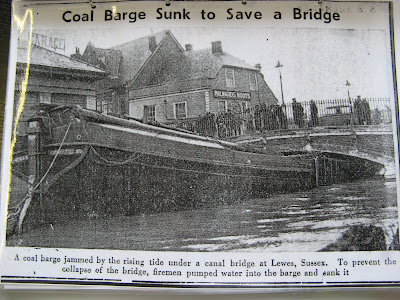 Finally got round to going to the local museum today. I have visited it before, but not in its new premises, which it's occupied since ... ahem .... 1996. It was nice, and well worth the one pound admission, and the chap in charge was very friendly and helpful, although sadly he couldn't find any old photos of our house.

Leafing through the other files of photos, of shops and ships and street parties and schools, it was (surprise surprise) this press cutting that got my attention. It was unlabelled, but I surmise that it was from a national newspaper, on the basis of its reference to a 'canal' bridge and its rather melodramatic take on the incident.

Our friendly curator dug out a book (Alan F. Hill, The Lower Ouse Navigation 1934 - 1967) which describes what happened from local press reports and and eye witness account. The barge in question was called Shamrock and was a spritsail barge of 87', with a 21' beam and a loaded draft of 6'6", capable of carrying 155 tons. On this occasion, in March 1937, she was loaded with coal, which would have come by coaster from Tyneside or Wales to Newhaven, to be taken by barge to Lewes for use (in this case) at the Phoenix Ironworks, some eight and a quarter miles upriver, and the most northerly of the five wharves on the lower Ouse. The newspaper report says coal, but pig iron was also brought by barge to the Phoenix Works (currently the subject of a controversial housing development).

Having been unloaded, Shamrock was being poled backwards downstream when a pulley block on the bow caught on the north side of the Cliffe Bridge. Before this could be freed, the bow was trapped under the bridge by the rising tide. Soon the stern was three feet out of the water and, according to the eye witness, almost the whole of the rudder was visible. It was feared that not only the boat, but also the bridge would be seriously damaged. The solution was to call in the Lewes Fire Brigade to pump water into the empty hold - not to sink the boat completely, as implied in the press report, but sufficiently to relieve the pressure on the bridge until the tide began to fall again. Once this had happened the water was pumped out again. There was some damage to the barge, but the bridge was unscathed. Nonetheless, this incident seems to have been the final straw contributing to considerable local opposition to the use of the river for transport, and effectively sounded the death knell for the port of Lewes; the last commercial traffic to the town by water was in 1939.
Posted by S at 6:22 PM

An interesting read. I am a huge fan of local history, and love nothing more than going to places just to find out the history of the places and the people who lived there.
I also enjoyed you piece on the beach. I reckon if I did not live on the canal I would have to live by the beach. For some reason I have a thing about water and wanting to be near it, and yet as a kid we lived on a farm, no where near water, how odd is that LOL.
Great posts and very interesting.