Up the Ouse to Lewes 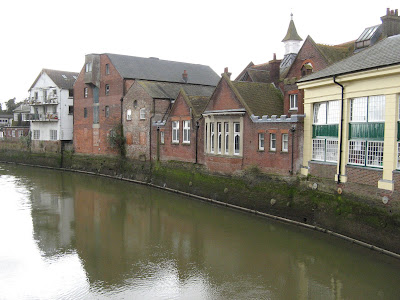 On Saturday we visited Lewes, the County Town of East Sussex, seven miles north of and up the Ouse from Newhaven. It's not a rare occurence, as Baz was at school and is now at college there, but it's always a treat. Lewes has to be my favourite town, and I'd live there like a shot if I could afford to. Which few people can. It's trendier than Shoreditch and has more Hampstead Liberals than NW3. You can see people get on the train at Victoria and just know by the way they're dressed that they're going to get off at Lewes. Here is part of the High Street on a normal Saturday morning - not even the week of the Farmers' Market: 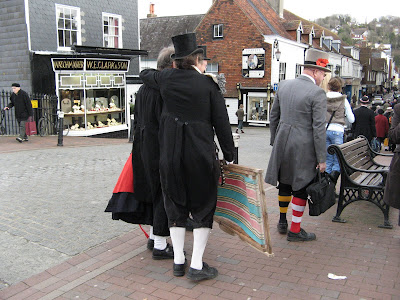 Lewes is of course famous for its atavistic and terrifying bonfire celebrations, which I have to admit I've been too cowardly ever to attend. But every November 6th a number of Baz's classmates would turn up with perforated eardrums, missing eyebrows, scorched hair and various interesting holes in their clothes (and occasionally in themselves). Also of late the town has hit the news because of a spate of fairly systematic vigilante action (possibly not unconnected to a more intimate than usual knowledge of explosives) against the town's parking meters.

This part of town was very badly hit in the floods of 2000; the Harveys shop in the background of the photo above (white with tiled gable) was inundated to a height of seven or eight feet; many shops have plaques marking the height of the floodwater, usually above the tops of the doors. Hence the new red brick wall around Lewes's most important building (!) the aptly named Bridge Wharf Brewery. That's where the wharf was, when the river was still navigable (and it was navigable from the sea as far as Lewes until a few decades ago). The top photo is the view from the other side of the Cliffe Bridge (from which burning barrels of tar are thrown on Bonfire Night), looking downriver. 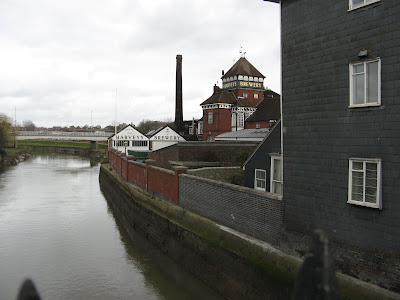