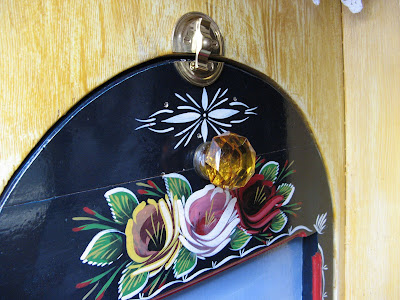 Last weekend I spent a lot of time in Warrior's quasi-traditional back cabin, because Jim was oiling the floor throughout the rest of the boat. I lit the stove, sat with my feet stretched out in front of it, looking through the open hatches at the other boats and the sun shining/rain falling on the canal ... I even laid in stocks and made tea on the stove. I could quite happily have sat there all day. What am I saying; I did quite happily sit there all day.

Part of me is slightly uncomfortable with the idea of (re)creating a 'traditional' 'boatman's cabin' on a modern boat; is it fakery; is it in some way patronising (sort of like Marie Antoinette's farm)? But I can't help loving it for itself, on its own terms. I love the ingenuity of the design - the reason it hasn't changed over centuries is because it can't be bettered. Add another couple of feet for a toilet and shower and you have a unit capable of accomodating at least one person in a space half the size of a small room. I love the painting, not because it's 'traditional', but because it's lovely to look at (which in turn is probably why it became traditional in the first place). OK, I admit that I have added a few unnecessary touches to make it more traditional looking: the floor, the curtain, the photo; I have no real consistent excuse for that other than that they're interesting and decorative. And the rug, which was a challenge to make and is a thing of beauty in itself. So I admit I'm not averse to a bit of fakery if the effect is pleasing - maybe it would be worse deliberately to set out to subvert the conventions. But I do draw the line at ribbon plates, which as I've mentioned before, for some reason I just don't like.

Anyway, we made a few minor improvements this time; replaced all the galvanised rabbit hutch catches with nice brass ones, and fitted this lovely yellow cut glass knob, which I've had for years, to the table cupboard. Naturally, in the course of attaching it it broke, but thanks to Super-Araldite, I hardly think you'd know ...
Posted by S at 7:49 PM