Words to strike fear into any builder's heart. Because they never are simple or little, these jobs. Would you believe it would take half a day to change two light switches, for example? Warrior had these switches, which are horrible: 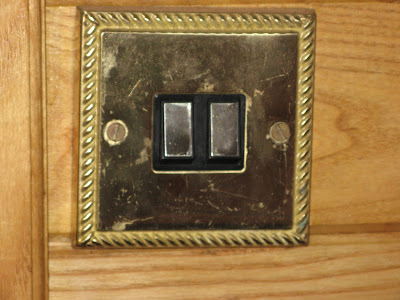 We found these in B&Q, and thought they were much nicer - quite expensive, at around eleven pounds apiece, but worth it aesthetically. 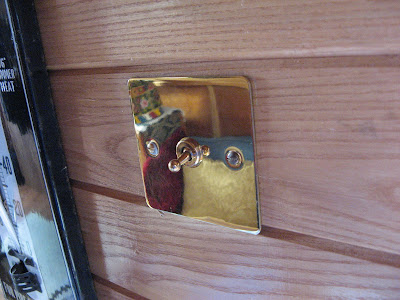 Just a simple matter of swapping them over then. Undo two screws, swap over two or three wires, do up two screws, and Bob's your uncle, and, as Jim is wont to say, Fanny's your Aunt Mary.

Oh no it isn't. One the old switches, the switch and the wiring is all contained in a small box about half an inch deep, half an inch wide, and an inch and a half high. Although these are domestic switches, they weren't mounted on a box, but screwed straight to the t&g boarding, with a small hole drilled out behind for said box and wiring. No problem. The new switches, we discovered, don't have a little, deep, box on the back. They have a bloody great shallow one, extending to within half an inch or less of the edge of the front plate. Only a few millimetres deep, but necessitating hacking a much larger hole in the boarding. This boarding is ash (we think) very hard, and 3/4 " thick. What's more, the hole has to be shaped to leave lugs into which to put the screws. It took hours of chiselling and drilling.