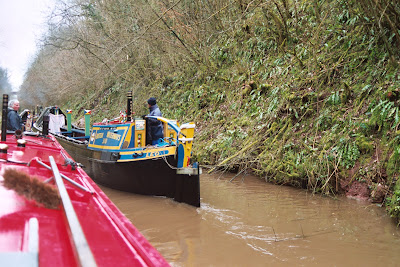 Warrior has an encounter with the Working Boats Project last year

I'm not quite sure how we came to sign up for the Working Boats Project - I think maybe we picked up a leaflet at Ellesmere Port. Speaking for myself, the motivation was purely selfish - without sufficient experience to offer any meaningful assistance, I was hoping that we would be able to watch and learn and, maybe, one far off day, I might get to steer a butty ... In the event, our involvement has been minimal to zero. This may in part be because we haven't pushed ourselves forward to get involved, but we also got the impression that they're (understandably) mainly interested in people who can already do useful things.

The first sign of the budget cuts biting was the redundancy (following regional amalgamations) of the BW employee who co-ordinated the Project's volunteers; now we have each received a letter saying that 'In light of the current financial situation .... it has been decided to reintroduce a modest annual subscription fee of £20 per person or £30 per couple per financial year.' This is kind of sad - as our involvement has been so minimal there's no way we're going to pay up. If I were going to donate that sort of money to waterways causes, it wouldn't be ones that BW is so closely involved in. I'm a great supporter of BW's existence, but right now I'm not going to trust them with any more of my cash than I have to; I am also a great supporter of their right to be publicly funded and voluntary donations undermine that.

I would however like to take issue with the suggestion that £20 (or £30 for two) is a 'modest' subscription. It's bigger than the sub I pay to any other waterways related organisation. And a small suggestion of how they could economise: there really wasn't any need to send the three members of this household separate copies of every letter and newsletter.
Posted by S at 9:02 PM