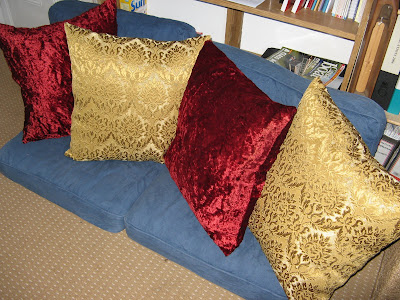 The larger and more egregiously ugly of the two black chairs that came with Warrior has now been removed, and brought home, where it graces (looms over) Baz's study. The saloon looks so much better without it; it's almost like a different boat. The removal of one of those horrid objects is the compromise that we arrived at, and to be fair, on its own the remaining chair - smaller, neater, better quality - doesn't look so bad. It's actually also more comfortable. That will now be Jim's chair, as I was the one agitating to get rid of at least one of them. Now, I would have been quite happy to spend the rest of my evenings sitting in the back cabin, feet up by the stove ... but apparently it is considered unsociable to sit at opposite ends of the boat, so we have a Plan.

The first Plan was to make a built-in seat at the rear end of the saloon, up against the kitchen divider and opposite the stove. But the new Plan is even better. It involves two boxes that (and this is the cunning part) look built in, but actually are free standing. So if we don't like them we can take them out again. Also they can be slid apart and a board laid across the gap to make a bed, should we ever find ourselves in the position of having two willing helpers on board at once. They haven't actually been made yet, as we are still awaiting the delivery of the cherry (to match the ceiling)-veneered ply. Then they'll be finished off with ash trim to match the rest of the saloon and kitchen. In our cavernous shed we had a set of sofa cushions, which we were using on Helyn. We've reappropriated them, to save on upholstory, and will make the boxes to fit (28" square tops, but obviously smaller at the base). Today I dipped into my vast stock of old curtains and made some new covers for the big feather cushions which are also nicked back off Helyn. (Helyn, by the way, is our first boat, a 22' GRP cruiser, currently sitting on our drive). The golden yellow nicely matches the fireplace tiles, and the crimson velvet (which I absolutely love) is reflected in the borders of the door panels. So I still get to sit with my feet up by the stove, in great comfort and luxury. And golly, I deserve it.
Posted by S at 7:53 PM

Looks good, similar idea to what I was going to do, until I decided to get those futon cubes. As these boxes aren;t built in, you'll be able to re-arrange things a bit to keep yourself amused (at least thats what I do....)