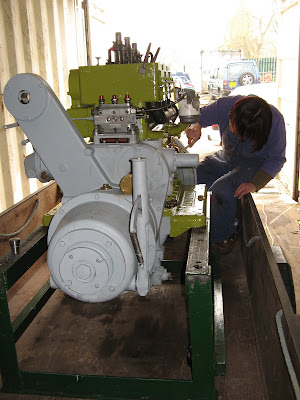 Should I ever tire of academia, I think I might have a future as a contortionist - and I've never thought that before. But I've never before painted a fully assembled engine on a high sided trailer before, and I've surprised myself with my abilities. The first coat is finished, all over. Everyone who's seen it says they like the 'dirty lime green' that we were warned off. The engine enamel isn't the easiest paint to put on, but it covers really well (I am in fact in the process of disputing the necessity of a second coat) and dries nice and shiny.

Warrior is looking like a completely different boat since the repaint. Today Jim finished the tunnel bands and touching up the blacking, but it was too windy to try to start on the temporary raddle red topcoats: wind means flying grit, dust and other debris and we want to give it a fighting chance. Thankfully though it stayed dry. It was also, apparently, cold, but thanks to Messrs Damart I remained blissfully unaware of this. As someone who has been made miserable by the cold all my life, the discovery of clothes that actually, really , keep you warm
has been a revelation.
Posted by S at 7:41 PM