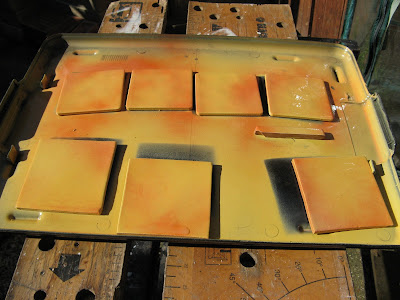 I like that title! It just came into my head as I typed the word 'tiles'. The tribulation is that we were three tiles short for behind Warrior's saloon stove. This was because the tiles were originally bought for Andante's smaller hearth, and when we decided to deploy them on Warrior instead we thought we wouldn't have to cover the bit right behind the stove, but we were wrong; as the French stove's flue comes out of the back rather than the top it will have to sit further forward, making the whole space behind it visible. The shop where the tiles were bought (must have been a good year ago) has changed hands and they can't help us ... But Jim had a brainwave. Using his china-repairing skills and equipment, he has spray painted some plain tiles to a hopefully similar colour and effect. Sufficiently similar, at least, to stop them immediately catching the eye. As they are right down at floor level, they shouldn't be subjected to too much heat.

Other tribulations encountered today include the cherry ply ordered for making the new seats not actually having been ordered after all, and the new casting for the gearbox apparently having got lost in the post. Well, that news enlivened a dull day somewhat, anyway.
Posted by S at 9:06 PM