Beer. No, not boats. Sorry. 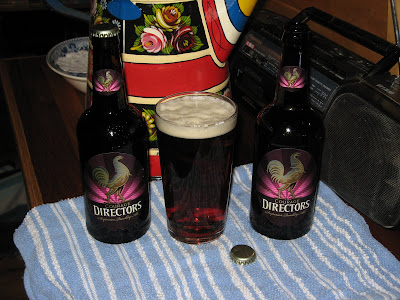 The Spar shop in Brewood (and I suppose Spar shops in general, but this is the only one I ever visit) has a fantastic selection of bottled beers for such a small shop. It doesn't have so much in the way of, say, dinners, but it clearly has its priorities right. Most mornings when we're up at Stretton with Warrior Jim goes over to Brewood to get one of their two copies of the Guardian. And last week, in Spar, he found the holy grail: Directors in bottles. Courage Directors (with all due apologies to Harveys) is probably my absolute favourite beer, and has never, as far as I'm aware, previously been available in bottles - only cans, which I wouldn't touch with a ... um ... long shaft.

Since Courage was taken over by Scottish and Newcastle it was getting harder to find Directors on draft too, but I understand that S&N have now hived the brand off to be brewed by Charles Wells, so perhaps its appearance in bottles is down to that. It certainly lived up to expectations on Saturday night, so provided it's available down here too (I see no reason why not, though I haven't checked yet) life is now just that little bit better.

Of course, in local pubs it will still, always, be Harveys - they don't sell their best bitter in bottles though. And for any local readers, don't forget to keep boycotting the Lewes Arms. And for those further afield - you can do your bit by boycotting Greene King!
Posted by S at 7:11 PM