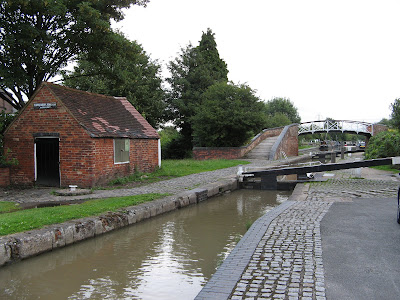 A.K.A. Hawkesbury Junction, where the Coventry joins the Oxford Canal, but called Sutton Stop by boatmen after the family that used to run it. One of those evocative place names where you hope you might find a bit of a connection with the past ... well, no such luck really last Saturday night when we tied up there; as cleansed and soulless as the rest of today's cut (well, there were a few joyful exceptions which we came across a little later on the trip). TheGreyhound pub even had a no smoking area outside. (The smoking ban has created a whole new dilemma: as a non-smoker, I now feel guilty when sitting outside in case I'm depriving a smoker of a seat.)

With a spanking new housing development opposite (where Seftons yard used to be?) it was all but impossible to imagine how it might have looked in the past, or to relate it to old photos, and as it grew chillier we withdrew inside the pub (which was packed and quite nice; we heard good reports of the food and will try to time things so we can try it next time). We sat ourselves at a table with a pleasant if vague chap with a very sweet brown puppy and a tendency to repeat himself (I never met so many people like that until I started boating). Then an older couple, also with a puppy, came and sat down next to us, and the woman, who must have been in her sixties, I suppose, struck up a conversation with me (while Jim was hearing for the seventh time how the floodwater was fifteen feet from the vague man's mate's back door).

And she was from a boating family; lived on working boats until the age of eight, when she was sent to live with an aunt ('They made me go to school; I thought I'd been sent to prison', she said). She told me how the children would build a bonfire, there at Sutton Stop, and play round it while her mother was doing the washing and her father was in the pub; the same pub where we were sitting. 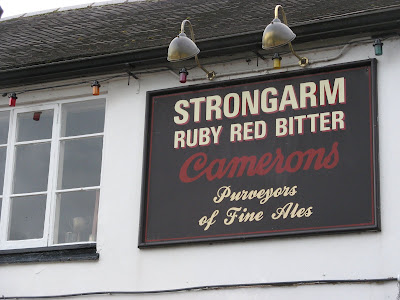 I leave it to others to make political comments about this picture...
Posted by S at 6:52 PM