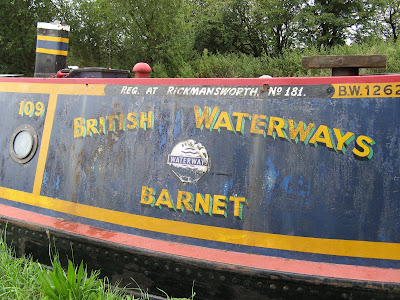 Legend has it that the Grand Union Town Class fleet acquired their names from perusal of a railway gazetteer or timetable (as an aside, why are there none beginning with M?). This wouldn't explain, however, why a surprising number of them are actually named after stations on the London Underground.
Armed with my trusty tube map and the relevant pages from A M Models website (a splendid resource) I have once more donned my metaphorical anorak and come up with the following:
The Northern Line gives us (from South to North): Balham, Angel, Hampstead, Edg[e]ware and (High) Barnet.
On the District Line we find: Ealing (Broadway/Common/South), Chiswick (Park), Kew (Gardens), Bayswater and Paddington.
The marvellously evocative Metropolitan Line takes us from Aldgate out to Pinner, Chalfont (and Latimer), Chesham and Ruislip.
That's five for each of those. Then there's also Stratford, on the Central Line - although I accept that in that case they might have had the other Stratford in mind; and there is Poplar, but that's on the Docklands Light Railway, which definitely didn't exist in the 1930s.
Some of these also have National Rail stations (Balham, Ealing Broadway, Stratford, Chalfont and Latimer, Paddington); others may have had in the past, but certainly not all. Some (e.g. Angel) are not even towns, but districts or areas at most. Two (Ealing and Barnet) are London boroughs.

(Photo of Barnet on the Staffs and Worcs, 24th August 2006. Taken especially for my Huddersfield colleague John, proud son of Barnet and lifelong supporter of Barnet football club)
Posted by S at 2:51 PM

Perhaps whoever decided where Tube stations should be, or what they should be named, had been a working boatman previously?

As far as I'm aware there is no first hand knowledge of how the names were chosen. The speculation that they were selected from a railway gazetteer is the only feasable explanation I've heard.....Can Granny Buttons come up with a better idea? .......How else would a name like Angel come to be?

Poplar was a station on the London & Blackwall rly. It is now the site of Blackwall DLR station....some distance of east of its namesake, Poplar DLR station.

The station names used by GUCCCo. often form strings out along a line of railway.....Paddington, Ealing, Southall, Slough, Taplow, Reading......I've often thought about plotting them out on a map of the UK to see if there was any significance to the choice, but never got round to it.....I've heard it said that there was some link to the home towns of the directors of GUCCC.......and that Belfast was chosen in honour of Harland and Wolff, though is that likely as WJ Yarwoods, Walkers of Rickmansworth, Steel Barrel Co. etc were never so honoured.......

All of the names have the railway station link. Some have the name as only part of the station title. Many are still currently stations, others have been long shut, many have the lines lifted and some are even on preserved heritage lines.

By the way, my great uncle John Palin was apprenticed at Uxbridge Steel Barrel Co. in the early 1920's and remained there all his working life. I only ever met him the once when I was a child, long before my interest in canal boats so can't say that he actually worked on the building of the 'George & Mary'...But like to think he probably did.
Hairy-Neil

From Wikipedia.....
To add to the confusion, there was another station known as Poplar, on the North London Railway which was to the north-west of this station by the East India Dock Road, on the site of the current All Saints DLR station. This was often referred to as Poplar (East India Dock Road) to avoid confusion with the L&BR station.
Hairy-Neil

It seems obvious to me - the names allowed the BW powers-that-be to play the board game version of 'Mornington Crescent', but using england as the board... ;-)

Ah, I like the line of thought but the naming of the boats predates BW and their predecessors by 12 years....

Hi Sarah, sorry I missed you as you moved Warrior from boat yard. I did keep a look out for you (Trent and Mersey) but I must have missed you passing.

As far as your ‘Tube Class’ comment is concerned and certainly all the other responses so far, I have heard several times from different sources about the GUCCCo naming their boats from a railway station gazetteer and with that I have no problem.

What we do have to be careful of, is setting things up to become accepted as ‘traditional’ or ‘historically correct’. As far as ‘classes’ of narrow boats are concerned, I do not think there was ever such a thing and is a term that should be left for the anorak wearing railway spotters to classify their engines by and not narrow boats.

45 years ago one would have never even heard the term ‘class’ of narrowboat this is a modern ‘noddy boating term which has only appeared in recent years (the last twenty!) and also it is one which has no place on the canal system for already it is banded about freely by all and sundry. (The same as wearing big cowboy hats and coiling ropes over the tiller pin) As far as I am aware, The Grand Union Company did not order a set of craft built to be known as ‘Town Class’ and another smaller set to be known as the ‘Star Class’ Boatmen never referred to their boats as ‘town’ or ‘Star’ class’, but you would have heard them say “as they was runnin a pair uv big Woolwiches” or ‘Ricky’s” or “Northwiches” Let us ensure that we do keep the true traditions of the cut alive and not basterdise them with modern terminology.

Working drawings refer to the boats by letters such as type 'F' boat, besides which who would call a class of boats 'Star class' when not all the boats are named after stars but in fact a collection of various heavenly bodies eg Comet, Meteor, Crater, venus, Moon etc.

I am sure my comment may stir a few responses but it is an area I do feel strongly about. PS keep up the excellent blogg.

Thanks to all of you especially Neil, and guccco with whom I agree completely - I realise 'Town Class' etc are post hoc designations but they have become an accepted useful shorthand for boats built at a certain period. I hope it was OK to use the term in the context of writing explicitly about the names, rather than the boats themselves.

Thanks for pitching in - I know Granny Buttons takes a different view on this too, but for me gatting an exchange of views in the comments section is one of the main points of a blog.