Coventry Cathedral: demonstrable proof that not all modern architecture is rubbish.
The rest of Coventry: overwhelming evidence that 97.62% of it is. 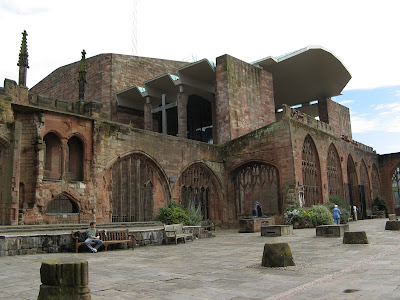 Everyone knows that Coventry was horribly bombed, and subsequently - defiantly and/or hopefully - rebuilt for a brave new world. I had previously only visited the city centre, and found it depressing beyond measure; not only did it seem to represent the worst of sixties (or, I suppose, fifties) architecture, with its low underpasses and masses of damp grey concrete, but this was given added poignancy by the evidence that they were so proud of it at the time. On that visit, I hopefully followed the signs to the canal basin, but they petered out, and I had to retrace my steps back to the station and get my train back to Huddersfield without seeing the water.

This time, on the advice of my colleague Rosie, who used to work in Coventry, I was determined to visit the cathedral. There's a bit about its history here. It was magnificent. 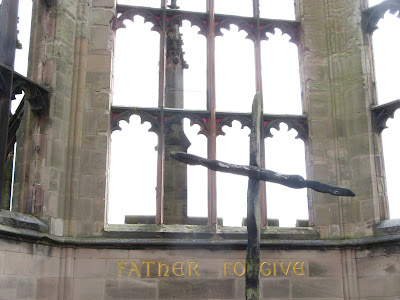 You don't have to believe in god to be moved by this. In fact, knowing it to be the work and inspiration of humanity makes it all the more awesome.

Anyone who's not visited Coventry Cathedral should add it to their list of things to do. It's an unforgettable experience.
Martin