Settling down with a DVD 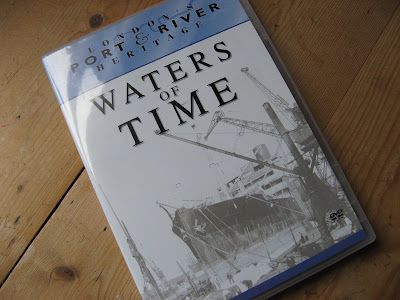 Last week I went to Birkbeck College's open evening (I didn't have much choice: I work there). Birkbeck is a college of the University of London, established to provide part time higher education for working people; it has also incorporated the extra-mural studies department of the University of London which means that it provides a whole range of short, non-degree, courses which although they can lead onto degree courses, people often do just for interest.

As I was wondering around in a free moment (the courses I was plugging are a bit of a niche market and there weren't long queues at my desk) I stopped by the History desk to see if they offered any canal-related learning opportunities. Sadly, no - but as a next best thing I have sent off my enrolment form for a module called The Port of London and Docklands 1700 - 1945. I reckon I can work a bit of narrowboat action onto that one.

On hearing about this, my colleague Simon (surely the only other regular reader of Towpath Talk in the faculty) lent me a couple of DVDs, and tonight we settled down in front of the computer (take note, TV licencing people) to watch Waters of Time (available from the Museum of London's online shop, if you're tempted).

The DVD features four films, all more or less about London's docks. One was made in 1951 for the festival of Britain, one in the mid 1960s, and one in 1921. The fourth ranged a little more widely to take in the role of the City in international trade. The really striking thing was that the only real visible difference between the 1921 film and the 1960s one was the hats worn by the stevedores. The working methods seemed identical; no wonder, perhaps, they only had another twenty years or so to run.

The 1951 film featured one of the Port of London's own extensive police force, who 'stands in the path of swindler and smuggler' (it did tend a bit towards the poetical, that one). That obviously brought to mind how these days it's terrorists that everyone's worrying about, and it gradually dawned on me whilst watching all the films that your terrorist would have had a much harder time of it in the circumstances that pertained then, with so many people around, and (if the PLA promo, for that is what it was, is to be believed) constant checking and sampling of everything going on, in place of today's minimally-manned, just-in-time efficiency.