Journey to the end of the world, sorry, Coventry 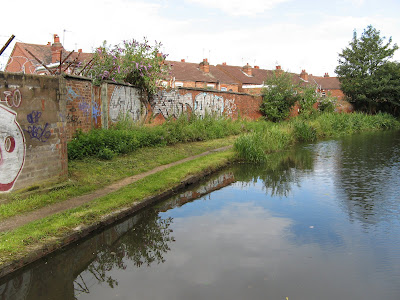 We left Sutton Stop on Sunday morning, and didn't see another moving boat (and few stationary ones) until we were well into Coventry. To make the wait worthwhile, it was Snipe and Taurus. In a bridgehole. After that there were a couple of hireboats leaving Coventry, crews already well into the lager at 10 o'clock in the morning, but that was it. The approach to the city took us past vast semi derelict (but apparently still operating) chemical works; buildings reminiscent of the heyday of East German architecture, graffitied walls and overgrown towpaths. The nearer we got to Coventry, the more it felt like approaching the end of the world. It was great; a little taste, I fancy, of what canal cruising was like a decade or two (or perhaps three) ago, when it was the preserve of the hardy and the genuinely committed and required a real effort.

Also, mysteriously, there were lots of coconuts floating in the water. Even with global warming, I didn't see any palm trees overhanging the water, so our best guess is that they were unwanted (or unopenable) fairground prizes. But maybe this is a longstanding local phenomenon of which I am ignorant? 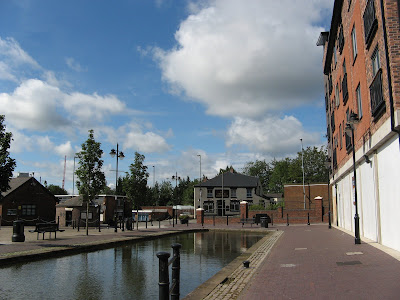 Coventry basin was almost devoid of boats, and, when we arrived, of people too. We went off for a wander round the city, which was on the whole very depressing (except for the cathedral, which will get a separate post). On the way back I was steering so it was left to Jim to grab some photos of Charity Dock, which I found very impressive. 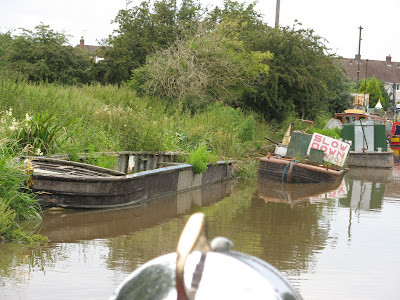 No boatyard worthy of the name is complete without a few of these, I reckon (they still count if they're on the bank).
Posted by S at 4:48 PM

Coconuts in canals are rarely windfall, although who knows what we may be able to grow here in the future. More often they are the result of hindu puja where various things are offered to the gods via the local river, or of course canal. Petals, rice, coloured powder and coconuts are involved. Where I am working at Bulls Bridge, a common variation includes the thin, blue plastic bag, initially used to carry the above items from home to the waterway, and then chucked in too, for good luck; alternatively this can be draped on the nearest hedgerow before blowing into the water.

Its not the hindus who make the most towpath mess though - check out the canalside near Hayes station for a record breaking stash of lager cans - funny how towpath drinkers never drink ale!

Now if only they could be educated to put the cans in the carrier bags then they wouldn't blow into the water, and they would be easier to collect too...

Ah, that makes sense. Thanks Mike!