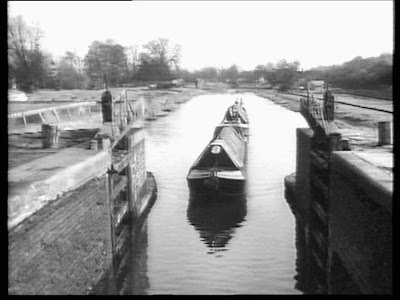 The other week I finally weakened and bought another DVD - this widely advertised collection of British Waterways Archive film. And I've finally finished watching it. The collection comprises nine short films, some not very memorable, and some memorable for, perhaps, not the right reasons. Some of them reminded me very much of the programmes we used to get shown at school, although that might just be my memory playing tricks.

The first three, older, films were pretty good, while the later ones became a little trying and repetitive after a while. Most memorable of these was World of the Waterways (1969) in which a rather camp young man called Kenneth, whom we are meant to believe is a student, dons an Arran sweater and makes a personal voyage of discovery after following some people with a dinghy across a field ... no, really, you have to see it. He meets a variety of other people enjoying the waterways, many of whom are also wearing spotless Arran jumpers. The penultimate film was narrated by Johnny Morris, so I had to switch it off, and the final one (an American view, c. 1985) wouldn't play properly, but that might have been my machine. The colour films have aged far worse than the earlier black and white ones.

However, one film - the first one of the second DVD - is worth the price of admission on its own. In Inland Waterways (1950) we see Bill and Joe Beresford collect their orders at Bulls Bridge, and take a load of aluminium ingots from Brentford to Birmingham in Pinner and Downham. And that's about it. It's breathtakingly, heartbreakingly, beautiful.
Posted by S at 6:34 PM