Going anywhere nice for Christmas then? 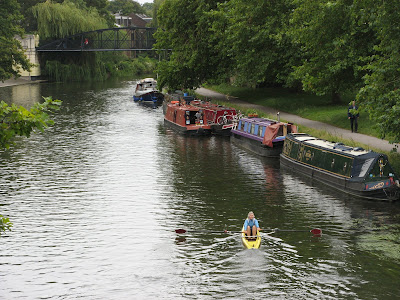 I had lunch with a couple of colleagues today. One of them said 'I'm having a long break this year. I'm going to Jamaica ...'. The other said, 'I usually go to St Lucia, but I'm too busy this year.'

I said, I thought we might go to , erm, Cambridge... Well, to go anywhere at Christmas is pretty radical for us. We did the year before last (to a stationary Warrior at Golden Nook), and just managed to steer ourselves between the Scylla and Charybdis of hypothermia and carbon monoxide; stayed home last year but kind of missed the excitement. So this year we plan to go boating, especially as we now have a boat that moves under its own steam (OK, internal combustion).

Originally the idea was just to mooch about the Middle Level some more, maybe mount an assault on Holme Fen in the hope that the weed that defeated Temeraire and Tenacious in the summer would be mostly dead by then. But whilst chugging along on our last outing, I remembered what a lovely time we had in Cambridge, and thought what a great place it would be to spend Christmas and/or New Year, especially if we could meet up with Craig from Pyxis and his fellow Midsummer Common residential boaters again. For about an hour I was really excited, and then I spotted the flaw in this plan.

Warrior's canal licence expired at the end of September, and we're planning to get a Gold Licence (why does that instinctively have capital letters?) in January, which is the only time you can get a full year's worth. So for now Warrior is a sans papiers, unable to leave the Middle Level. Oh, the humiliation of being turned back at Salters Lode doesn't bear thinking about.

On the other hand, I subsequently thought, about two weeks later, what about a temporary licence? The EA website says that a week's licence is 10% of the annual fee - exhorbitant, but potentially worthwhile for a week's holiday. So I rang them up and asked how much it would be, and was told £148. I know licences have gone up, I thought, doing a quick and very rough adding-a-nought-to-the-end, but surely not that much. 'Are you sure', I asked, 'It says on the website, which I have open in front of me.... etc etc...'. Oh yes, she said. £59.80. That sounded rather better. So it may well be Fenland Festivities this year. There were some really super pubs ...
Posted by S at 8:38 PM

Sounds like you were quoted the price for a months licence which is 25% of the annual fee.......

I hope you have a lovely Christmas where ever you spend it.
We will be where we are at the moment for Christmas, as we are locked in at the moment. We want to head down to Oxford. Aston Lock will be shut until January 14th and then Great Haywood is shut until the 19th Jan, but if all goes well with the engine etc we should be underway then.