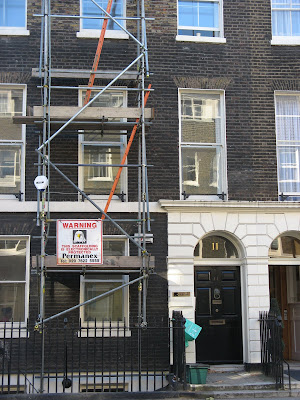 I've been to visit another holy site today. It was a few weeks ago I saw Elizabeth Jane Howard's memoir, Slipstream, in a charity shop. Unread (wonder why), hardback, two quid. A quick glance at the index showed that Rolt and Aickman got a mention, and there was a picture of them all on board Ailsa Craig, so I forked out. I read one of her novels once, and it was so boring I can't remember which one it was (no, I lie, it was The Sea Change. But I can't remember a thing about it).

The memoir was sort of interesting, but was basically a litany of dysfunctional families, unhappy affairs, genteel poverty and writer's block. One of the unhappy affairs (I don't believe she had a single happy one) was of course with Robert Aickman, who comes across as a singularly unattractive character - possessive (even though he was married to someone else), clingy and dependent.

Anyway, it served to remind me that there was another site to which to make a pilgrimage not so very far from my office, so off I went today to find it and gaze in awe. I had half thought it might have been marked with a Blue Plaque, but evidently not, although the Pre-Raphaelites next door but one have got one, and Millicent Fawcett across the road. Almost every other building round here, in fact. Perhaps they just don't want to attract hordes of tourists ... it's our little secret.

OK, you've got me.
I think I've worked out that it is Gower Street, from the picture it is clear it is No 11, but WHY the feeling for the blue plaque!!!
Please put me out of my misery!
(I've been reading your blog, and many other Nb ones, for some time now as I am a frustrated wannabe! Love the blog.)
Ann

Just wait a little longer for others to have a go... Yes, you're spot on with the location, so let's see if that helps.

Nice to hear from a new commentor too, thanks!

It was at 11 Gower Street that the inaugural meeting of the Inland Waterways Association (IWA) took place on the 15 February 1946. Robert Aickman was appointed chairman and Tom Rolt Honorary Secretary. Wouldn't have got it without Ann's info on the address though!

Collaborative working - that's what I like to see. Spot on both of you. I tried to get the upper storeys in as that's where Aickman had his flat.

Phew....
Thanks for the info, it was really bugging me.
Collaboration sounds pretty good to me too!!
Ann