When we first went to the rubbish bins at Bill Fen we were somewhat perturbed to see a sign saying that 'only Rainbow-type bags to be put in these bins ... no black sacks.' I thought we had perhaps to purchase some specialised environmental binliners. I hate it when I don't understand things, especially when they're things I'm meant to be doing. Anyway, I looked inside the bin, and there seemed to be all manner of small bags of rubbish in there, so I was none the wiser, but I thought, oh well, if they can all get away with using carrier bags then so can we.

All became clear on our first visit to the local shops. As predicted, someone had stopped to offer us a lift along the track into Ramsey (this was when we hadn't got the car there, but I always walk now anyway, and hope that I don't get offered a lift). 'I'm just going to the Rainbow,' she said, 'Is that OK for you?' Er, yeah, anywhere will do, we replied. But when we got there, all was revealed. 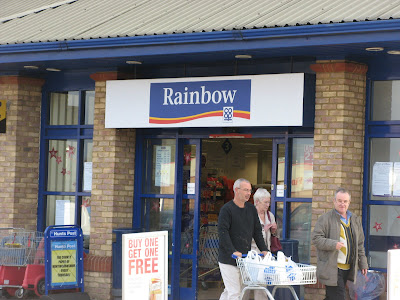 Rainbow is the name by which, for some reason, the Co-op goes in this part of the world (whether that be Ramsey, Cambridgeshire, East Anglia or some even larger region I still don't know). It's nice to be able to shop at a Co-op; we don't have one near us at home. The Ramsey Rainbow isn't enormous or particularly well stocked (four models of washing machine but no taramasalata) but is OK on the beer front (has St Peter's organic beer which is very nice and comes in beautiful embossed bottles) and caters for all the basics. Yes, I know I don't actually need taramasalata.

The sign by the bins now asks depositors to use 'supermarket bags' which I guess is clearer if less fun. The logic is that with smaller bags you can get more in the bins, because they fit the space more neatly. We are also encouraged to recycle as much as possible by taking our recyclables to the recycling centre at the Rainbow. This I am happy to do, and as I go, ritually, every day for the paper, it's no hardship, even on foot (god, I'm sounding like a smug cow, aren't I?). They don't take plastic there, though, so there's still a fair bit of rubbish for the bin. Much of the rest of the domestic waste is stuff that, at home, would go on our amazing compost heap - teabags, peelings. I thought perhaps they should set up a big compost heap at the marina - the bigger the better - there's plenty of space and surely plenty of uses for the end product. Jim thought that perhaps it would be too difficult to stop people putting the wrong sort of stuff on it, but surely most people have a pretty good idea? I might suggest it next time I see John or Lyn - unless of course Lyn reads this first!
Posted by S at 4:15 PM