Twilight on the Twenty Foot

Yeah, yeah, I know, sunset photos, SO boring, so easy ... but admit it, so nice. Just back from a weekend with Warrior at Bill Fen, and from a grand total of three days, have managed to acquire 144 digital photos (ugh. how gross) as well as about sixteen of what I still think of as 'real' ones. 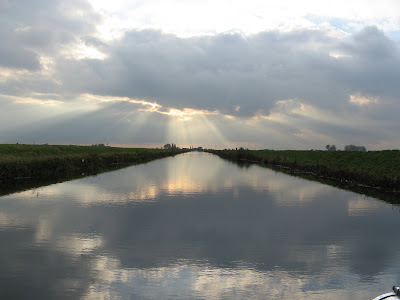 We got a few little jobs done, and also found time for a brief trip out, leaving on Saturday morning for the brief run up the High Lode into Ramsey town (of which more anon), then back and via the Nene Old Course and Whittlesey Dyke and a very sharp turn onto the Twenty Foot River, which we pootled up a little way before turning round, pootling back and tying up for the night - well, the afternoon, really. 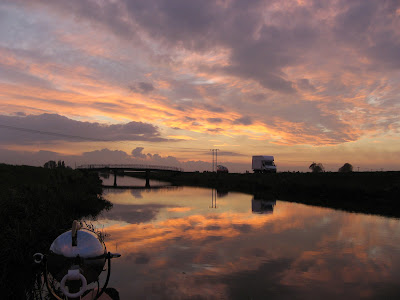 Just after half past four

Having cleared a number of fisherman (love trying to see if I can make them smile) we thought we'd found a fairly deserted spot - though there are few places on these drains that are far from a road - when a largish van and a car and a couple of blokes turned up. Our best guess is that there were there for a spot of night fishing (well, perhaps they think we're mad) although I never saw any evidence of piscicidal activity; first they turned their headlights on, then off; then they ran the engine... at any rate, I'll bet they were up to no good. 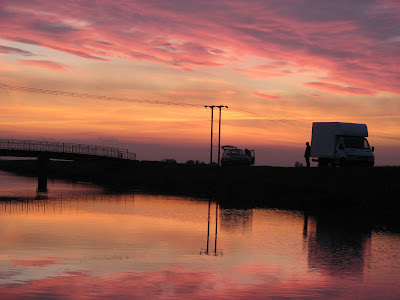 Nonetheless, we had an undisturbed night, and were ready for an early start this morning (well, OK, 7.30), which was lovely, watching the sun come up and dispelling the misty chill. In fact the weather was marvellous for the whole three days; we were incredibly lucky. 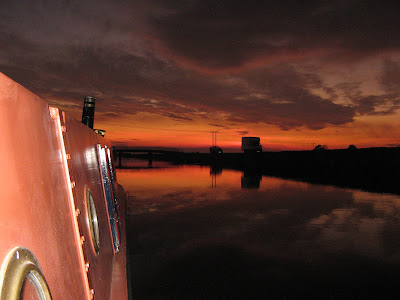 We had thought that we would have a good vantage point for watching local firework displays ... which we did, as we could see them in all directions across the flat terrain, but they were all to far away to be fully appreciated. On the plus side, that meant we could hardly hear them either; and anyway, who needs fireworks when you can watch the sun set?
Posted by S at 5:24 PM