Warrior WILL get painted... 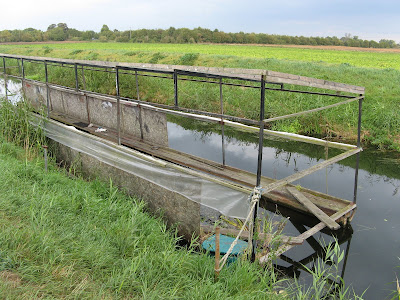 ... eventually. And this is where it will be done, we think.

It may not look much now, but it's long enough (especially as the plan was* to only paint one end anyway), and it floats. All (!) it needs is covering over with some translucent heavy duty plastic sheeting, and bob's your proverbial uncle. And hopefully that won't be as hard as it looks as we can put the boat in first and then work off its roof.

Getting down the bank to it without overshooting and falling in is a bit of a challenge, but we managed it once - a rope attached to the bank will make the task a lot easier.

At any rate, it's the best chance we're likely to get to get Warrior under cover for painting, hopefully now next spring.

*We still have, of course, to finalise the colour scheme and signwriting layout. I thought we had, but nothing, it seems, is fixed until that paint actually goes on. I still favour painting only the back cabin and engine room section, and having signwritten panels; Jim fancies having the name all along the side, tug style (yes, but, I say; real tugs don't have that configuration of portholes, nor such a long cabin). I have come round to his favoured colour scheme though: dark grey, black and cream. And to very plain, rather than ornate, signwriting.

But then, it did take us two years to decide what colour to paint the house. And that hasn't even got any writing on it.
Posted by S at 8:35 PM