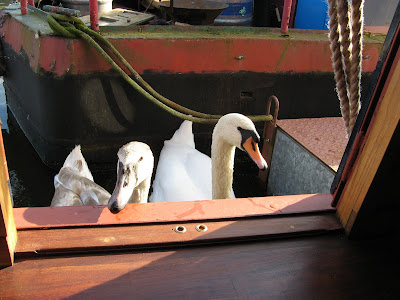 I am not a great animal lover. I'm a great believer in defending their rights (and yes, they do have rights, insofar as we have duties to them), and I am a vegetarian (was even vegan for a while) for that reason ... but that doesn't mean I have to like them. I respect some cats (but not ones that act like dogs), and some creatures look sweet from a distance, but close up I've found most of the rest of the animal kingdom (come to think of it, no need to exclude humans here) to be either smelly or scary, or, more usually, both. Guinea pigs are quite good I suppose, if you like that sort of thing.

We're all brought up to fear swans. They look beautiful from a distance (if you go for haughty) but we're always told that they can break your neck with one twitch of their feathers or somesuch, and I grew up believing that... then someone commented here that maybe that was a bit of a myth. Well, Jaytee (for it was he), you want to come to Bill Fen sometime! There is a family of swans there - two parents and three adolescents - who are not only defensively dangerous, but actively come looking for you.

The first time we were there, Jim was in the engine room when one of them stuck its head through the hatches and pecked him. And last week I found myself sidling through my own kitchen, back pressed to the sink, as the entire gang laid siege, hissing and pecking through the side hatch. (Later I put the perspex in and went 'na-na-ne-na-na' at them.) Then later, when Jim was making his lunch by said hatch, two of them sneaked up and tried to grab it - gave him the fright of his life. I refuse to feed them to try to make them go away, as I'm sure it would only encourage them.

All I can do is tell them that they're not doing themselves any favours. You're the sort, I tell them, that give swans a bad name. Do they care? I fear not. Another generation doomed to be outcasts.
Posted by S at 4:43 PM

I hope my previous comments didn't lead to any long-term injuries by way of giving you a false sense of security!

From what I remember I was proclaiming my doubt over swans being able to 'break your arm with their wing'. When John Peel was still alive (the DJ one)there was a discussion on Radio 4's 'Home Truths' over a few weeks about dangerous swans, including one poor chap who was attacked as a young boy on a canal in his rubber dingy. It pecked only twice - the first time numbing his arm so that he couldn't move it (and couldn't row out of harms way), the 2nd peck being equally 'lucky' resulting in a loud hissing sound & the rapid descent of the said craft. The bird then proceeded to get on his head and he is convinced, tried to drown him. Not a good day for him and he's understandably had a bit of a phobia since then!

Over following weeks much of the talk was of swans murdering cute ducklings(mainly by drowning), which it turns out they do because they live artificially close to ducks because of the availability of bread-wielding humans. I'm a veggie as well but it looks like the answer might be not to feed the ducks.