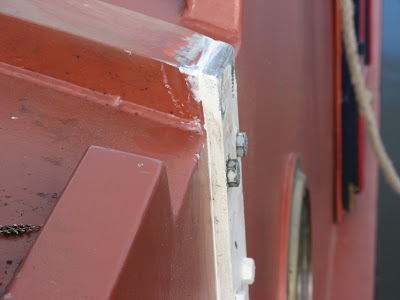 Quite a while ago we decided that when we finally paint Warrior we will only paint and signwrite the back end; the front of the cabin, and all the horizontal surfaces, will be left in raddle red. There's a big beam across the roof just foreward of the engine room, and this looks like a good dividing line, and we would have just taken the grey or black shiny paint up to there. But then at the RN rally we saw a couple of Stowe Hill boats which were fulsomely embellished with bolts and rivets and chunks of steel, and it was very effective, so we decided to adopt a similar tactic with Warrior, extending the roof beam down the sides to provide a physical division between the painted cabin and the rest of the, well, cabin, but the bit that you're not meant to notice is actually there.

This idea has been quite a long time in development, and various possibilities for fake rivets were considered, but found to be impracticable, so we have ended up with genuine bolts, some of which are genuinely holding the bar on, and some of which are welded on from the back and then ground off. After tapping the holes and bolting it on into a bed of paintable silicone, Jim ground the top flush with the beam so hopefully it looks like a continuation of it. The whole affair will eventually be painted black, and the rest of the rear of the cabin will be dark grey. The final details of the signwriting are still at the consultation stage....

In fact, only one side got done this weekend, for want of somewhere to stand to do the other side. By putting the boat stern in to the bank Jim was able to work off the pontoon to do the starboard side, but it was too short to do the other side with the boat facing the other way. We even went into Ramsey with the thought of doing it on the town wharf, but couldn't get close enough into the bank. However, now we know it works, the second side can wait until we get Warrior into the paint dock.

You can also see the final effect quite well in the last of yesterday's photos. I like it. I know it's fake as anything, but it will serve a useful decorative purpose, and I think it looks good.
Posted by S at 9:28 PM