And for the caravanners... 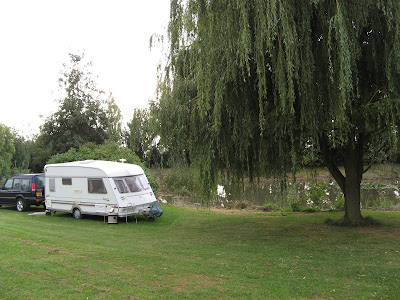 Many years ago (well, not that many) we had a camper. It wasn't just any camper. It was a 1974 Bedford CF Dormobile, like this one, only in a delightful elastoplast pink colour (the registration document said beige, but that didn't do it justice). It had all its original orange curtains. I bought it from one of the other mums when Sebastian was at nursery school - she was desperate, for some reason, to purchase a Citroen 2CV. We had it for many years, and towards the end of its time with us we had also amassed a collection of Volvos. These were known as Trusty Volvo (my original red 240 saloon); Rusty Volvo (a rather more dilapidated version that we had been given) and Thrusty Volvo (3l V6 960). The camper was thus given the honorary title of Crusty Volvo.

In order to get cheap insurance for it, we joined the caravan club. My goodness, if you think some boat owners are sniffy about less than perfect shiny brand spanking new boats, you should join the caravan club. You ain't seen nothing. They have a magazine just for people to be sniffy about other people's caravans in. I so wanted to turn up at one of their sites with the Crustymobile and see them explode. Sadly, we never did. We never went away for long in it, mainly because of my (I now see totally unfounded) objection to installing a porta-potti of some description. Shame.

The caravan club has sites, and it also has what are known as 'Certified Locations' (CLs) which are places you can moor your caravan but without shower blocks, entertainment etc. I recall once having hysterics at reading one of the letters in the CC magazine in which the writer stated 'my wife and I are enthusiastic users of certified locations.' Well, I laugh no more, because our wonderful next door neighbours are themselves extremely enthusiastic users of CLs. This post is, in fact, entirely for the benefit of Carl and Sean, as I have been singing the praises to them of the CL at Bill Fen, and this is really the easiest way to show them some pictures. 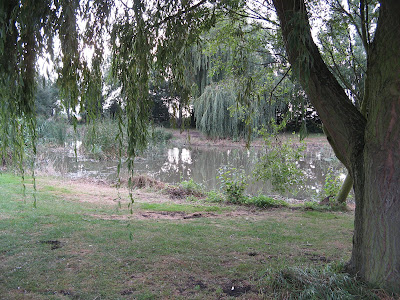 The CL is near where Warrior is moored, and it is lovely. It circles a large carp pond, surrounded by trees, rarely seems to be even near full, and at night there are bats.
Posted by S at 8:00 PM

Forgive me for being pedantic, but I'm sure you really meant to write "certificated location" the first time you spelled it out!

I shall go off and double check, but I always thought it was 'certified'. I shall be very disappointed if I've been wrong all these years.

I am very disappointed. Perhaps they've changed it since I was a member (she suggests hopefully....)

And, pray tell me, Caravan Club, what 'certificated' means that 'certified' does not?

Perhaps they didn't fancy the connotation of insanity.

I do love a bit of idle banter ;-)
Have got them injectors yet? Jim reconed the chance to go on a spending spree to Uxbridge Boat Centre was something that you couldn't turn down :)

Going tomorrow. My, he knows me so well! Have been promised coffee by Baldock.

Is this some sort of mass hallucination?

If it is a hallucination, is this the reason they are certified rather than certificated?

I missed out a comma.

I shall be pilloried.

Well perhaps I was not alone then in thinking it was certified. I looked on the Caravan Club website yesterday and it did indeed say certificated, but maybe that is a more recent innovation on their part. Perhaps they thought that a couple of extra syllables, a few redundant letters, would give them that extra cachet. If only I had kept my old Caravan Club magazines I could have checked.

Oh, and I have a CC handbook from 1997 where they're definitely certificated (I'm glad we're not all off topic here - I did check the post title!)

I think this had better be my last comment on this. (tries to escape the hornets...)

OK, well if anyone can tell me the difference in meaning .... otherwise I shall assume that the terms are interchangeable. Not your fault Halfie - the CC's! Very glad you brought it to our attention - this is the most comments any thread on this blog has ever had.

"extra cachet for the Caravan Club"?
Do we have an oxymoron here?
(always happy to be unlucky 13)