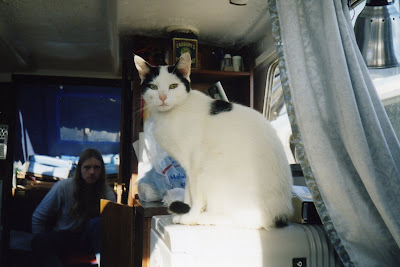 The late lamented Alan Coren, of whom I used to be a great fan (I wonder how many teenagers actually had a subscription to Punch in the late seventies...) called one of his books Golfing for Cats. This was on the basis of extensive research showing that the three most popular topics among the book buying public were golf, cats and the Third Reich (the flag on the cover sported a swastika). I suppose (judging from the bestseller shelves in WH Smiths) today the equivalent would be something like My really miserable childhood before I became a high class prostitute and found the holy grail or something similar.

Lots of people have successfully gone boating with cats. I met one of the more famous of these feline crew members last week - GC (Ginger Cat) of Alnwick even has his own web page. Our neighbours at Bill Fen, on Axe, have a very friendly cat called (phonetically at least) Greebo who often pops in to see us.

We have a cat whom we think would enjoy boating. Hopefully enough time has passed that no one else will claim him now if I tell his story... Floods Ferry, August 2005; our penultimate visit before bringing Helyn home, and as we drove in up the drive I saw a flash of white in the bushes. Later in the evening I went to investigate. I crouched down and kept still, and this cat trotted up to me, put his paws on my shoulder, and practically threw himself into my arms. He was thin and hungry, but still looked well cared for. He followed me back to the boat and we gave him some Weetabix, and then some toast and Marmite (it was a vegetarian boat). He stuck around us for the rest of the week, hopping confidently on and off the boat and sleeping with us most nights.

Asking around, no one knew anything about him or where he had come from, and no one really seemed to care. When the time came to leave it was obvious that no one else was going to take responsibility for him, so we decided that we had better take him home, and then set about trying to find his owners. We had no basket or box or anything, so we risked just putting him in the car - I have never known a cat like it; he sat himself on the back of the back seat and looked calmly out of the window for the three hour journey. When we got home he settled in straight away, and devoted himself to eating. From being a delicate, willowy creature (we named him Willow after the trees at Floods Ferry; a name that soon proved to be hopelessly inappropriate, but efforts on my part to change it to Woolwich did not catch on. The best I can manage now is to call him Willoughby) he turned into a muscular street fighter, not afraid to make his feelings known if crossed by cat or human.

Jim and I have each had a lot of cats in our time, but are agreed that we have never encountered one as intelligent as Willow. He's so well behaved and well trained that he has special privileges, and is allowed into parts of the house the other cats aren't. He can be quite vicious when crossed, though; I still have the scratches from persuading him to move from the bed to the kitchen before we left last week. I admire his spirit.

We think that he would love boating, and are sorely tempted to bring him along sometime. The main thing stopping us is the fear that he would run off and get lost as he obviously did before. He may have been a boat cat - he was certainly very comfortable and confident getting on and off - but we think it more likely that he got to Floods Ferry by stowing away in someone's - probably not his owner's, but maybe a neighbour's - caravan, as we quickly noticed that he has a propensity for jumping into any vehicle left unattended for more than a few seconds.

We were all set to take him at Christmas to see what he made of it - but the little bugger wouldn't get in the car. I told him then that it was his last chance ... but if he looks at me with those big green eyes, I might relent.
Posted by S at 10:42 AM

To Nanny, Greebo is still a sweet little kitten that plays with balls of wool.

To the rest of the world, Greebo is an enormous tomcat with a skin that looks less like fur then a patchwork quilt, no ears and only one eye. Greebo is a malevolent collection of life force who won't hesitate to fight anything. Dogs hide when Greebo's on the prowl, foxes detour around Lancre and even wolves avoid him.

The only creature that has successfully stood up to Greebo is Legba, Mrs Googol's Cockerel (See Witches Abroad), who merely looked at him and then scratched the ground in a way that drew attention to his two inch long spurs.

Does this remind you of the Axe cat?

Actually, I did watch Greebo drown a moor hen at the marina last summer, so maybe he IS aptly named.

At least I spelled it right then. I am woefully unfamiliar with Mr Pratchett's oeuvre