Back to nature, hmmm? 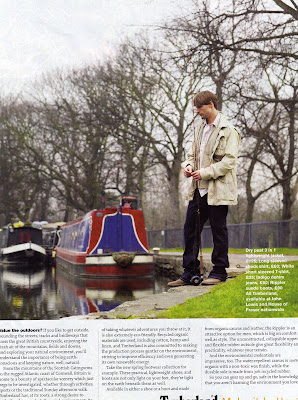 I do not read the Observer Sport Monthly magazine. I quite like the food one; the women's one is clearly written by men, and I don't read the music one either. But in the sport mag today there was a four page 'advertisement promotion' for Timberland clothes and shoes, featuring four photographs of a pensive looking young chap who has been given some fishing gear to hold and doesn't quite know what to do with it, by a canal, somewhere (I don't know where but I wouldn't mind betting it's not far out of London. Can anyone identify it?). Now the first thing is, I wish I'd known you could be a model with a chin like that; it would have given me a lot more confidence when I was younger.

My second thought was, ooh, how nice, they've used a narrowboat/canal background, the romance of our industrial heritage etc etc... But the I read the text and it's all a load of tosh about getting back to nature ... 'If you like to get outside ... enjoying the fresh air of the mountains, fields and downs ... exploring your natural environment, you'll understand the importance of being earth-conscious and keeping nature, well, natural.... From the mountains of the Scottish Cairngorms [as opposed to the English ones? Paraguayan?] to the rugged Atlantic coast of Cornwall... and so on and so on. Nowhere does it say 'a semi-urban man made canal with man made boats'. Oh no.

But I suppose it might have stretched the budget a bit going to the Scottish Cairngorms, or the rugged Atlantic coast of Cornwall, and our model might have got his £90 Rippler boots (made from organic canvas and leather) wet. But who are they fooling? (Probably nearly everyone, sadly).

The other week there was a story in the paper about a company (might even have been the BBC? I don't remember) relocating all its staff from London to Coventry, amid much complaint, and the next week there was a counter-feature about how jolly nice Coventry is really and you shouldn't believe all those nay-sayers who say it's horrid, and look, here's a photo of a canal to show you how pretty it is ... and I went 'but that's not Coventry, it's Atherstone!!' because I recognised it, which was really the most exciting thing about it.

One other thought while I'm on the subject of adverts. On the tube (and elsewhere) you often see adverts for television programmes (which on the whole make me glad I haven't got a telly). Why do they advertise television programmes? Because they want people to watch them to get good viewing figures to attract and keep advertisers. They want us to watch the programmes primarily so that we will watch the adverts. So they have adverts advertising adverts to us. Now tell me this is not a mad world.
Posted by S at 6:49 PM