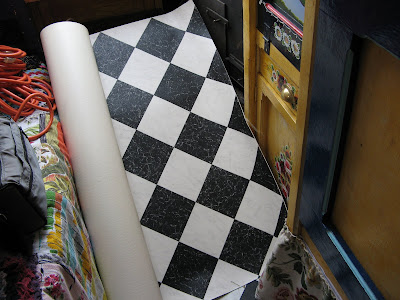 Contrary to many people's expectations (not least mine) the very cheap vinyl tiles I laid on the back cabin floor have stood up remarkably well - especially considering that they were laid on a very poorly prepared and uneven base. One of them has shifted, where the coal box gets dragged across it, and one has come unstuck where it overhangs the edge of the hole in the floor under the cross bed, and I caught the edge of it once when getting the spare toilet or something out from under the floor. But we planned to address this by getting another set of the same tiles and laying them over the top with the joins staggered.

We ended up using the tiles in the first place because we just could not find, anywhere, black and white checked vinyl with the checks running diagonally - there were plenty with them running parallel to the edge, but to lay it diagonally would have been so wasteful. To lay it straight just wouldn't have looked right, and would have highlighted all the unstraight lines of the cabin.

Then the other week I went to Barnsley, to interview councillors at the Town Hall. Arriving a bit early, I went and looked around the market. Suddenly I did a double-take; there, in a corner near the exit, was a stand with some pieces of vinyl flooring - offcuts maybe or samples, about six foot by four foot each, and right on top was a piece with a DIAGONAL black and white check pattern. The holy grail. Further investigation revealed that there were three pieces in this pattern, and what's more, they were only £3.50 each, for good quality, thick, fairly heavyweight (this will become significant) vinyl. I bought two pieces, and then I thought, hap'orths of tar (what if I cut one wrong) and bought the third as well. The man rolled them up for me and secured the roll with sellotape. I was on my own now with them, and my overnight case, and all my paperwork.

Rigging up a sort of carrying strap from a scarf I'd brought for no particular reason and the strap of my bag, I slung my bundle over my shoulder and made my way to the town hall. Then I had to take it back to the hotel with me for the night, and then, as I was going straight from town hall to station the next day, back to the town hall again. I must say all the town hall staff were very polite about it and one of them let me leave in in the corner of her office. My business in Barnsley completed, I once more shouldered my burden (which was starting to feel quite heavy by now) and begun the long train journey home. On the London train, I inserted my cylindrical trophy, with some relief at being able to get it out of the way, in the gap behind my seat, resting on the litter bin.

On arriving at Kings Cross, I discovered that its far end had fallen down behind the bin, leaving the front end firmly wedged in the narrowing gap between the seats. I had to wait until everyone else had got off the train and enlist the help of one remaining fellow passenger to hold the front end while I scrabbled about trying to lift up the back end again. Fortunately this was eventually achieved, but in the process, the silk scarf tore irreparably, so I now had no carrying strap. Shouldering it like a rifle, I made my weary way to the tube, and thence to Victoria for the final leg of the journey. When Jim met me at Lewes, I gratefully handed it over to him, and he was gratifyingly impressed by its weight. It went into the boot of the car and stayed there until we got to Ramsey. Next visit, we will try and lay it in the cabin. It had better bloody well work!
Posted by S at 5:08 PM