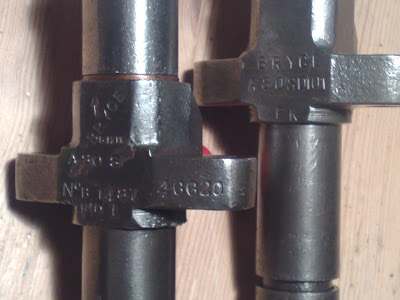 Now I do not wish to be mugged. Ever. But if someone had been going to try, I would rather it had been this afternoon than at any other time, because at the bottom of my innocent - nay vulnerable - looking right-on cotton bag, I had two rather hefty lumps of metal (I am not going to venture a guess at its exact composition) which might have been a bit of a surprise whizzing around a putative mugger's ear'ole. Fortunately, however, this was not required, the Metropolitan Railway still being a relatively civilised affair.

I have also achieved the long-held ambition of visiting Uxbridge - sadly albeit not yet by boat - in order to collect said lumps of metal, which are the injectors that Jim has bought to keep as spares in case - in case of what I know not, but Compo said so. Because I have an all-zones Travelcard attached to my ludicrously expensive season ticket, this was the cheapest way of getting them home - and was I going to turn down the chance of visiting this legendary outpost of the Metropolitan Line, taking a long healthy walk along the towpath to boot, plus having a mug of Baldock Chris's splendid coffee and meeting his lovely lurcher (whose name I sadly did not catch)? I was not. 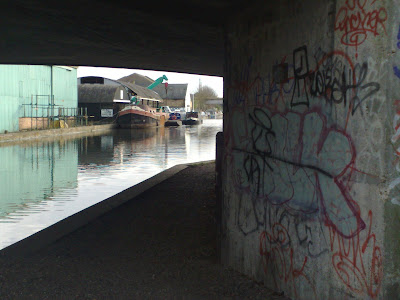 And once more getting to experience that magic little moment when you cross a bridge and the next thing you're nipping underneath it and into a hidden world. Outside of children's fantasy stories that's the closest you're going to get to Narnia or the Midnight Garden. I love it.

There are lots of names and numbers cast and stamped into the injectors - including one that looks like it might be a National engine number. Would they have done that?
Posted by S at 9:22 PM

Sarah
I think the numbers are significant to the original engine number. My injectors have:
5mm
NATIONAL
56214
No1

stamped on them.
My engine No is: 56214. I think I have the original injectors for Nos 1 & 2 cylinders and a replacement (not my engine No) for cylinder 3. Who's got my third injector?
I don't know what the 5mm, 6mm & 4mm means though?

Bryce are (or were - not sure if they are still in business) manufacturers of fuel injection equipment. Pumps and injectors. I know they were widley used on Lister/Petters.