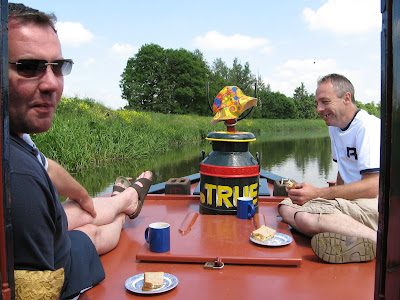 At long last today we played host to Carl and Sean, our next door neighbours from home. We'd nearly got all the brass finished by the time they arrived. They were delighted with the Bill Fen CL, and we were impressed with their new caravan.

Of course, we went out for a boat trip. It was a beautiful sunny day, so we thought we'd better make the most of it and set off straight away, making and eating sandwiches on the way. We went out onto the Nene Old Course and past Floods Ferry, where Carl and Sean came with the caravan once. All were agreed that it's not what it was, and Carl in particular took a dim view of the addition of static caravans. Then we turned round and came back past the marina and on into Ramsey to introduce them to the delights of the Rainbow before returning to Bill Fen. On the way back Carl got me into Bad Ways, and we were both sitting on the foredeck trailing our feet in the water. It was lovely. So nice to feel the sun on my back at last.

It's just getting dark now, after a beautiful delicate pink sunset, as I write this; Jim is asleep, and I'm sitting in the back cabin with the doors open, listening to the plaintive, demanding calls of the peacocks. Earlier we saw a kingfisher, not just the usual fleeting glance, but over and over as he flew and settled, looking just like one in a picture book, and flew and settled again, always just a little ahead of us. And there was a hawk, hovering low and completely stationary as we went past, again, the closest I've ever seen one.