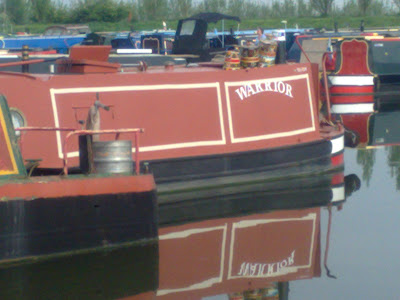 Suddenly, it's still light at 9pm (granted, BST); not only that, but I'm out in the garden in a sleeveless vest, feeling only slightly chilly, hanging out the last of the woolly socks and tights for the year. It's been a long time coming, but surely, at last, summer has arrived.

Baz and I drove back from Ramsey this afternoon, leaving Jim up there, brave and carless, to make a start on the painting. It now looks as if the paint dock won't be vacated until Wednesday, but it'll still be worth it. Kevin and Vicky are in there at the moment with Star, which is looking lovely. They painted it themselves, and Black Boat John (for that is the name by which everyone calls him) has done the signwriting, and we're very impressed with it. We'd seen a lot of his work around the place, obviously, but most of it was in a style we didn't really like - too fancy, or novelty-ish. But Star's signwriting is very plain, exactly how we want ours, and it's fantastic; not too perfect; just right. So it looks as if we will be getting him to do Warrior.

After looking at lots (and lots and lots) of boats we have decided to go for just two framed panels on the cabinside - rather than two written ones and two smaller empty ones, or some other combination. After waving Jim off to the Rainbow this morning to stock up with food for his sojourn, Baz and I equipped ourselves with tape measure, pencil and 2" masking tape to see how it might look. Imagine the tape line in black, on a dark grey background, with cream and black signwriting and a red handrail...
Posted by S at 8:14 PM