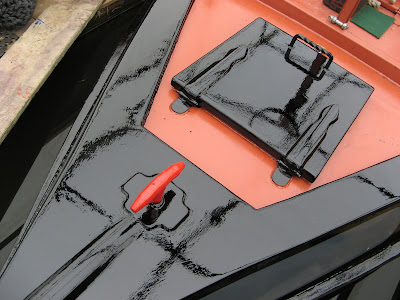 Warrior is all shiny. Out it sailed from the paint dock on Saturday morning... I stayed behind to pull the dock back in to the bank - you have to swing it out to get a boat in - and walked back along the bank, alongside warrior. The boat looked fantastic, and I had such a brilliant view, from above, at the top of the steep bank ... without the bloody camera. We trundled over to the pumpout, where I did get a picture, but nothing like the view from the bank. Then we went off for a little run, up the Nene Old Course as far as the junction with Whittlesey Dyke. For those unfamiliar with the terrain, it's not like a canal where you can just hop on and off; the banks are high and steep (and private); it's pretty hard to stop anywhere, so no photo-opportunities here either. 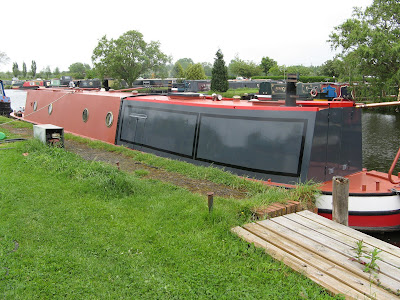 It has not all been quite plain sailing. Wandering around the boat for about the sixteenth time in the paint dock on Friday, cooing admiringly, I suddenly let out a little squawk. 'What is it?' cried Jim. 'Nothing, nothing', I said desperately, but he wasn't fooled. I had to break the news that where there was a one-inch gap between the two panel-framing vertical stripes, there should in fact have been a four-inch gap. There was much weeping and wailing and gnashing of teeth over the weekend but I think the final upshot is that if there is time, it will be redone. It's an absolute bastard, but it'll be the right thing for the long term. That painting's going to be there a long time.
Posted by S at 6:56 PM