I don't really do proud or ashamed to be British - for a start, Britishness is an artificial, political construct that it's hard to feel any affinity with (Englishness, on the other hand, with its cultural and linguistic hinterland, I'm quite fond of).

But last night I saw something that I did feel ashamed to be associated with, no matter how tenouously: 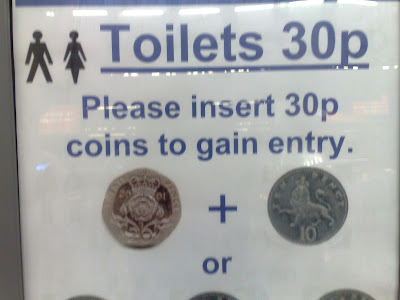 That's a fifty per cent increase, overnight, on an already outrageous charge for facilities that are mediocre at best. But it gets worse. To compound the obscenity a hundredfold, there was this: 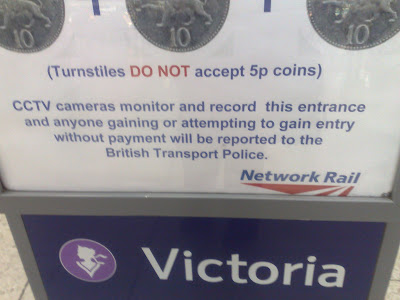 Now, when CCTV was first introduced, you might have been one of those people who thought it was a good idea; that it would catch major criminals, rescue kidnapped children, deter rapists, and all in all make your world a safer place. On the other hand, you might have been a sceptic from the start, concerned about the civil liberties implications of the growing surveillance society.

But either way, did you ever, in your wildest dreams or your worst nightmares, foresee the day when the technology would be deployed to terrify little old ladies into paying six bob to have a wee?

And it was sad and frustrating to see people practically queuing up to fed their notes into the change machine, and their change into the insatiable maw of the turnstile. Is there no human need so basic that a profit can't be turned from it? Will I have the nerve to continue sneaking in without paying (as an act of political defiance, of course, not meanness)? Well, I'm pretty sure there are no new CCTV cameras, and I never got caught before - and it would make an interesting test case (micturition martyrs, anyone?).

What everyone ought to do - male and female, young and old - is just stop outside the turnstiles and piss on the bloody concourse.

"What everyone ought to do - male and female, young and old - is just stop outside the turnstiles and piss on the bloody concourse."

But we won't because, the bloody CCTV will be watching us!